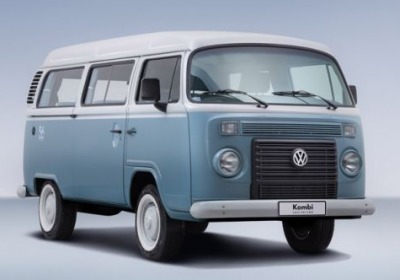 Brazil: the country of carnivals, indescribable beauty adjacent to abject poverty, Ayrton Senna and old Volkswagen models. Only they're not old – they're new, they're just based on old designs. The original Beetle continued production there long after it had been phased out elsewhere, but the original Kombi van has lasted much longer. That ends today, however, with the iconic VW Microbus ambling out of production on the last day of 2013.

VW kept making the van in Brazil with the original air-cooled 1.2-liter boxer four until 2005, after which the original design was updated with a 1.4-liter water-cooled engine. Today, however, it ultimately falls prey to safety regulations that mandate that all vehicles – no matter how old their design – need to have airbags and ABS, forcing Volkswagen do Brasil to cease production of the Microbus after a 56-year production run. But the latest word is that the Kombi (as it's presently known) could get a stay of execution – or at least a resurrection in short order.


According to reports, the Brazilian government is looking into granting the Type 2 Microbus an exemption from said safety regulations, reasoning that the van was designed long before the advent of airbags and ABS. If the measure goes through, the Kombi Last Edition (pictured above) could prove not to be the last at all. So what do you think, should the Microbus get an exemption from Brazilian safety regulations for nostalgia's sake? Vote in our poll below, then have your say in Comments.

See also: Audi investing $30.3 billion through 2018 for product expansion, Volkswagen could outsell GM in China for the first time in nine years, VW says it has sold over 100,000 TDI diesels in America this year.