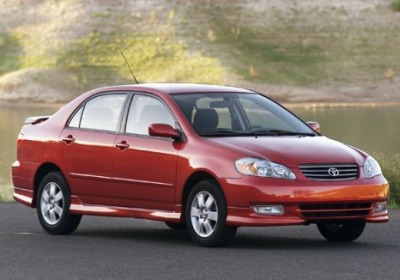 Most vehicle recalls that take place these days are a result of some problem that happens during the manufacturing process by the automaker, but as we see here, parts suppliers can also factor in to problematic safety issues. Automotive News is reporting that a total of 3.4 million vehicles produced by Japanese automakers between 2000 and 2004 are being recalled globally due to faulty airbags produced by an outside supplier, Takata Corp.

According to the report, vehicles from Toyota, Honda, Nissan and Mazda are being recalled because of passenger front airbags that do not inflate properly. Globally, Toyota is said to be recalling around 1.73 million cars including 510,000 in the US composed of Toyota Corolla, Matrix, Sequoia and Tundra as well as the Lexus SC430 for the 2001 through 2003 model years; this is the second time this year the 2003 Corolla and Matrix have been recalled for an airbag problem. Honda is recalling 1.14 million models, Nissan another 480,000 and Mazda 45,463. The article says that Takata supplied faulty airbags to non-Japanese automakers, but it did not specify which ones.

Honda and Toyota have released information on their own websites about the recall, while Nissan and Mazda have not yet commented. Read official press releases from Honda and Toyota, below, and look for updates as we have word from the others.

The vehicles involved include certain Toyota Corolla, Corolla Matrix, Sequoia, and Tundra, and Lexus SC 430 models manufactured from 2001 – 2003. More precise vehicle information is being developed, but about 510,000 vehicles may have to be inspected to locate the suspect inflators.

Owners of vehicles subject to this safety recall will receive an owner notification letter by first class mail. The recall remedy will involve inspection of the front passenger air bag, and, if it is equipped with an affected inflator, the inflator will be replaced with a newly manufactured one at no charge to the owner.

TORRANCE, Calif., Honda will voluntarily recall approximately 426,000 model-year 2001-2003 Civic vehicles, approximately 43,000 CR-V vehicles from the 2002-2003 model years and approximately 92,000 model-year 2002 Odyssey vehicles in the United States to replace the passenger front airbag inflator. It is possible that the passenger front airbag inflators in affected vehicles may deploy with too much pressure, which may cause the inflator casing to rupture and could result in injury. Honda is aware of one crash in which a passenger front airbag deployed with too much pressure, causing the casing to rupture. Honda is not aware of any injuries or deaths related to this issue. Honda is announcing this recall to encourage owners of all affected vehicles to take their vehicles to an authorized dealer as soon as they receive notification of this recall from Honda. Mailed notification to customers will begin in late-May, 2013. In addition to contacting customers by mail, at that time, owners of these vehicles will be able to determine if their vehicles require repair by going to www.recalls.honda.com or by calling (800) 999-1009, and selecting option 4.