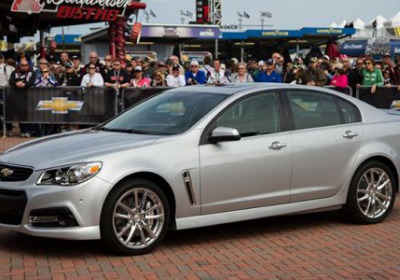 Not including the women and men who built it, the 2014 Chevrolet SS has only been seen in person by a piddling number of people – fewer humans than would fill the gymnasium at a high school volleyball game. Not including the men and women who built it, no one has driven it. Even so, it is already saddled with two controversies: the way it looks and the way it shifts.

First to that shifting. Did we love the last Americanized Holden, the awesomely sportsome Pontiac G8 GXP, and its six-speed manual? Of course. Do we wish the SS came with a six-speed manual? Of course. But we'd like a toboggan to come with a manual transmission. We'd put a manual transmission on a weasel if we could because we're just wired that way; if it moves, it should come with a stick and a clutch. Or at least the option.

Let's climb down off the ledge, though. We haven't driven the SS and we have no idea how good (or not) the automatic is. And the Hobson's Choice in transmissions when it comes to sport sedans like the BMW M5, Mercedes-Benz E63 AMG and Jaguar XFR-S and, oh yeah, cars-that-really-should-have-manuals like the Audi R8 and Nissan GT-R and Porsche 918 and every single Lamborghini and Ferrari, for instance, hasn't stopped us from enjoying what is clearly the gruesome, dual-clutched demise of Western automotive civilization. Because in spite of our ululations at the dying of the six-speed light, we understand.

All we're saying is sure, we're disappointed, but let's drive it first – then we'll find out if this is something more than a philosophical tragedy. When we asked what were the chances of a manual we were thrown the bones of "it's a possibility down the line," and that's all we need to go to Optimism Level: Lloyd.

To that other, bigger controversy: the way it looks – it seems many of you were expecting more, or at least more different. However, as far back as 2009 it was acknowledged that the VF Holden Commodore would be an overhaul of the VE series, and mainly under the skin at that. There was neither the money nor the business case to create a brand new car. If there is an issue with the looks of the SS, it's our opinion that we might have discovered 90 percent of the cure in the sedan's trunk.

Ever since it became clear that Pontiac had a permanent dinner date with Hades, people began suggesting – strongly – that General Motors keep the G8 coming but as a Chevrolet. Now that it's here – true, five years has passed – there's a vocal group saying, "Well, that's not exactly what we meant." Here are the 2008 Pontiac G8 GXP:

A 2012 Holden Commodore SSV – essentially still the VE Commodore first introduced in 2006 and upon which the G8 was based:

It's clear that designers also incorporated details from the Holden Special Vehicles GTS into the new 2014 Commodore SS and Chevrolet SS:

Looks are subjective and we're not trying to change anyone's minds, but there is your evolution. Make of it what you will. What do we think? It's certainly subtle, and we do think the rear end has too much Malibu, but we're fine with the looks. It wasn't the design that surprised us, though, it was the way we couldn't tell if the exterior of the SS is really a junkie for chrome or if it's merely the silver hue of the reveal car that's playing tricks on us. Before any more sinister judgment, we'd like to spend some personal time with a sedan in a dark color. Even with that, though, we think those chrome-plated door handles need to go. Aspirational mid-sizers and pickup trucks get shiny handles; once you've made it, you're supposed to be beyond those kinds of shiny flourishes. We would not complain if Chevrolet added a chrome delete to the two other options on the SS purchase sheet – sunroof and color.


It was when lead engineer for the SS, Dave Leone, showed us the full-sized spare in the trunk that we thought "This could get a lot better." Instead of a chromed 19-incher there was an alloy wheel in flat black. Evidence would also indicate a very different personality for the car when in another car: this Commodore SSV – without shiny handles – looks the business.

There will be plenty of time to resolve that issue. It is under that bright skin where the deepest allure of the SS is said to reside. The G8 GXP was momentous because it was a blistering drive that could fit five people. With five years of engineering progress, the drive part of the SS equation should be as safe as betting on the sunrise.

We don't have all of the numbers yet, but the ones we do have at least point the way to goodness. Lead engineer Leone said the VF Commodore has lost almost 95 pounds (43 kilograms) compared to the VE, the lightening a part of General Motors' Efficient Fundamentals initiative. Beyond the aluminum hood and decklid, other parts made of the lighter-than-steel material include items like the instrument panel structure and lower control arms. "You make a car lighter and it does everything better," he said. Hear, hear.

Losing weight on those upper panels has lowered the center of gravity and there's a near 50/50 weight distribution. The staggered 19-inch wheels (the rear track is wider than the front) ride on – and will be sold on – Bridgestone Potenzas, the front tires being the same spec as those on the Ferrari California, the rear tires the same as those specced on the Aston Martin DB9. Put it all together and Leone says the SS can achieve a maximum lateral acceleration of nine Gs. This definitely nothing like last rear-drive performance sedan Chevrolet made: the late-nineties Impala SS.

We were told the handling of the Commodore and the SS are "very close" – the exact phrase we got regarding the SS was "It's tuned for the Chevrolet brand," made no more clear with "It's dynamic but relaxed as an everyday driver." The buyoff rides for its handling were done in the US, but since "the Chevrolet brand" includes the Spark on one end and the Corvette ZR1 on the other, we'll wait for seat time to figure out what that means for a halo sedan. And it might not make a difference to the Aussies in the crowd, but Leone also said the Commodore will have "a little less power" than the square 415 horsepower and pound-feet of torque that we'll enjoy.

Where does it fit? Without a price we'll wait to see which crowd Chevrolet wants to attack, but when you're talking about full-sized hi-po rear-wheel drive performance sedans you're pretty much talking about the SRT versions of Chrysler and Dodge sedans and a couple of Germans – and now that the Mercedes-Benz E63 AMG has gone 4Matic, perhaps that's just one German. The Taurus SHO is all-wheel drive and we omitted the Cadillac CTS-V because we were told more than once about the SS, "It's not a CTS-V."

Chevrolet is perhaps most proud of what the SS driver will experience in everyday use of the car, calling it "the perfect mix of refinement, sophistication and technology." The cross-stitched, cut-and-sew materials on the instrument panel are properly padded. There's a seven-inch touchscreen displays a MyLink system that just won a Best of CES award in the car category at this year's Consumer Electronics Show, and a full-color heads up display. The advanced park system, showing up for the first time on any Chevrolet, will parallel and reverse park at the push of a button. The rear cross traffic alert monitors oncoming vehicles up to 66 feet on either side of the SS. The front sport seats are supportive everywhere and still comfortable, and we had plenty of room in back with the front seats set to our driving position. The illuminated readouts inside the HVAC dials look properly luxurious. Said Leone of the technology and materials refinement in the SS, "We never had that kind of sophistication before."

We agree, and after one short evening of being able to crawl around in it, we found nothing inside to complain about. We hope to say the same about the entire car after we drive it.