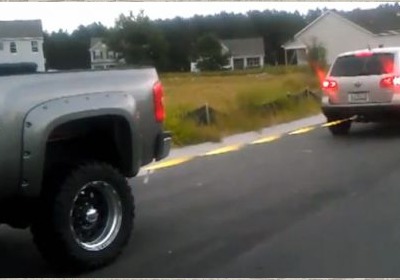 A couple weeks ago, we watched a Chevrolet Silverado get dominated by a Dodge Ram Heavy Duty in a fullsize pickup tug-of-war, but in that truck's defense, Chevy's Vortec gas engine was no match for the torquey Cummins turbo diesel. For our next round of vehicular tug-of-war, a Duramax-powered Silverado HD takes on Volkswagen Touareg V10 TDI.

Now, on paper, putting the Duramax V8's 365 horsepower and 660 pound-feet of torque up against the V10's 310 hp and 553 lb-ft looks like an easy win for the Bowtie, but unfortunately, this battle has a similar result as the Dodge versus Chevy video, with the Silverado smoking its tires trying to move forward as it gets pulled backwards. Put another way: YouTube 2, Chevy Silverado 0.

It just goes to show, though, that big tires, bolt-on fender flares and goofy smoke stacks don't improve your towing abilities. Besides, what did the Silverado driver expect when the Touareg V10 TDI has towed a Boeing 747 in the past?


Scroll down to watch the cargo-hauler tie up with the family-hauler.