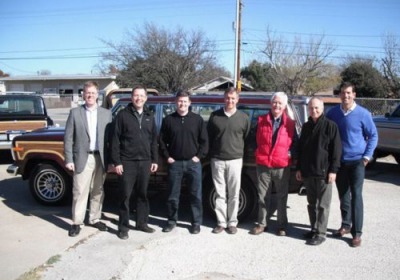 They have the very best intentions of rolling out a seven-passenger vehicle.

Wagonmaster has made a name for itself restoring and selling factory-perfect Jeep Grand Wagoneer models, bridging the gap between when the last production machine rolled off the line in 1991 and present day. The company's efforts haven't gone unnoticed. The entire Jeep product planning team took a little field trip to the company's facility in Kerrville, Texas back in December, and they weren't just there to take in the sights. According to owner Leon Miller's son, Chip Miller, the Jeep team was there to do research for the successor to the Grand Wagoneer throne.

"They have the very best intentions of rolling out a seven-passenger vehicle," Miller said.

Officially, the group wanted to know more about Wagonmaster customers as well as what aspects of the vehicle the company felt were essential to the Grand Wagoneer name, but Miller says it was clear there was a certain research element to the visit.

"They were really taking in shape of the body and what items can't be left out of a new [Grand Wagoneer]," Miller said.

Jeep is looking at three powerplants, including a small turbo-diesel

What's more, the team showed the Wagonmaster staff a few early renderings of what the three-row machine would look like, and even discussed engine options. Miller says right now, Jeep is looking at three powerplants, including a small displacement turbo-diesel and what would likely be the 3.6-liter Pentastar V6 married to an eight-speed automatic transmission, as well as a small-displacement turbo diesel and a V8. With all of those options already in play in the Grand Cherokee, we imagine moving them to a larger platform wouldn't necessarily be difficult.

Speaking of chassis options, Miller said the team has considered a number of possibilities. The executives said they aren't interested in building a Grand Wagoneer on the Commander or Dodge Durango platforms. Instead, the Grand Wagoneer would likely be based on a stretched version of the Grand Cherokee. Shades of gray, we know. Inside, the new seven-passenger behemoth would rival or eclipse the Grand Cherokee Overland in terms of luxury and refinement.

Of course, all this planning seems dashed by the news that Chrysler is delaying the introduction of a three-row Grand Wagoneer for at least a year or two. Even so, Miller says the Jeep executives made it clear the company won't stay away from Wagonmaster for long. A team of designers are set to return to get a better look at the company's stable this spring.

If you can't wait a few years for the next-generation Grand Wagoneer, you can always give Wagonmaster a call. They'll be happy to put you behind the wheel of a factory-original machine of your very own. Check them out here.

We've reached out to Jeep for a comment on the visit, and we'll update you as soon as we hear back.

See also: Chrysler earns $1.7B in 2012, revises product plans for US, 2014 Jeep Grand Cherokee pricing leaks out, Chrysler expecting up to 200,000 9-speed transmissions for 3 models this year.