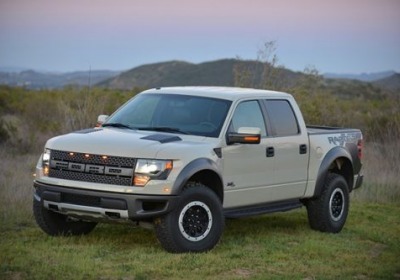 There are precious few details, but what we do know is that Ford will be revealing images of "appearance upgrades" for a special-edition 2014 F-150 SVT Raptor on April 9. The slideshow will happen during a Motor Press Guild luncheon at Ford's Design Center Showroom in Irvine, California.

Without photos or further details, we're left to wonder about the extent of these changes, but aren't expecting anything too significant given the venue. Ford is understood to be revealing a next-generation F-150 with a big weight loss – as much as 700 pounds – for 2014, though it isn't yet clear if that's the truck's model year or simply its on-sale year. For at least a couple of years, Ford forums have been suggesting changes will come with the 2014 Raptor, so there could still be a bigger surprise in store. Either way, we'll know what all this means in a little more than a week. The press release below has the official details, but for the moment, we'll content ourselves by ogling the 2013 model above.

LOS ANGELES, April 1, 2013 /PRNewswire/ -- On April 9, 2013, Ford will debut images of the 2014 Ford F-150 SVT Raptor Special Edition with new appearance upgrades at the Motor Press Guild (MPG) luncheon held at Ford Motor Company Design Center Showroom in Irvine. Since the first Ford Model T car with a modified rear body rolled off the assembly line in 1925, Ford Motor Company has been on the forefront of defining the American pickup truck. More than 80 years later, Ford Truck Group Marketing manager, Doug Scott will discuss the company's current position in the truck category and provide an exclusive preview of the newest addition to its line.

In addition to previewing the Special Edition Raptor, Scott will provide analysis of Ford's position in this competitive marketplace that has had Ram, GM and others hot on its tail for decades. Scott will also review Ford's current line-up of F-Series pickups and how it maintains the necessary versatility to attract a variety of industries, from agriculture to fire fighting. Real world examples of Ford F-Series Trucks used for work in Southern California will be displayed, including a San Diego County Fire Authority F-150 SVT Raptor rescue truck and one of Grimmway Farm's – the nation's largest carrot producer, located in Bakersfield – F-150 EcoBoost field trucks.

To continue its transition in meeting the needs of entrepreneurs, large fleets and professional contractors, Scott will also discuss the Ford Transit and Transit Connect next-generation fleet of vans that offer leading fuel economy and utility.

"With the industry focus on fuel-efficient, smaller cars, it's easy to forget that trucks are a dominant segment in the American market. This luncheon will give a closer look at the uniquely American truck market -- and the first look at the newest version of Ford's ultimate performance truck, the 2014 SVT Raptor Special Edition," said Aaron Gold, MPG president.

ABOUT MPG
The Los Angeles-based Motor Press Guild (MPG) is the largest automotive media association in North America with more than 800 members. This non-profit trade guild is dedicated to promoting professionalism in automotive journalism through education and information exchange. Members include journalists and analysts from print, broadcast and online outlets as well as public relations representatives, consumer groups and governmental bodies tied to the automotive industry. The organization hosts regular meetings featuring key figureheads in the auto industry and is widely recognized for its annual Dean Batchelor Award program and annual industry MPG Track Day.