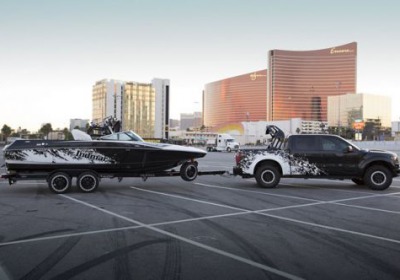 Nameplates like the Mercury Mariner and Lincoln Navigator aside, Ford hasn't offered a marine engine in over two decades. But through a new partnership with one of the biggest names in the business, the Dearborn-based automaker is dipping its proverbial toes back in the water.

Announced yesterday at the SEMA Show in Las Vegas, the new partnership between Ford Component Sales and Indmar Marine Engines will see the 6.2-liter V8 from the F-150 SVT Raptor and F-Series Super Duty marinized for use in boats.

The largest privately owned inboard gasoline marine engine manufacturer in the world, Indmar has been in the business for 43 years, and figures the Ford V8 will be just what watersport enthusiasts are looking for to tow waterskiers and wakeboarders to their hearts' content.

Ford and Indmar Marine Engines made the announcement today at the Specialty Equipment Market Association premier event – the 2013 SEMA show.

"Ford is pleased to be working with Indmar Marine as it plans to re-enter the marine market," said Jamy Hall, president and CEO for Ford Component Sales. "Ford has a long history of bringing power to the marine industry and views this effort as a strategic opportunity for the company."

Ford's 6.2-liter V8 engine, which is offered in F-150 SVT Raptor and F-Series Super Duty trucks, will give watersport enthusiasts the power and torque necessary to meet the increased workload demanded of today's watercraft, allowing them to go further with Ford out on the water. Indmar Marine Engines will offer three models of varying horsepower and torque that will have plenty of power to pull the most avid water-skiers and wake boarders.

Indmar Marine Engines has been in business for 43 years and operates multiple advanced manufacturing facilities in the United States, with distribution centers in Tennessee and California. The company is the engine supplier of choice for some of the most well-known, high-performance boats used by watersport enthusiasts across the country.

"The 6.2-liter engine was specifically built for a truck, providing the torque needed to tow heavy weight – which is exactly what today's high-performance watercraft need," said Chuck Rowe, president of Indmar Marine Engines.

"Our sport has evolved, and with heavier boats, bigger wakes and larger ballast and passenger capacity, the demand on the engine is even greater," Rowe added. "We looked at the total market, and have spent a great deal of time, research and development dollars to find an engine that will best fit the demands of watersports."