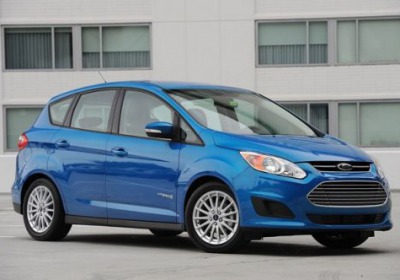 Ford has announced that it is introducing "calibration updates designed to improve on-road fuel economy for owners of the 2013 Ford C-Max Hybrid, 2013 Ford Fusion Hybrid and 2013 Lincoln MKZ Hybrid."

We can speculate that these changes are at least due in part to lawsuits over mileage claims of hybrid vehicles. The automaker is enhancing 2013 models starting in August by raising their electric cruising speed to 85 miles per hour from 62 mph, optimizing the use of active grille shutters and the climate control system, shortening the engine warm-up period by 50 percent and reducing electric fan speed to minimize the fan's energy consumption.

It bears mentioning that Ford is doing pretty well in the US electrified vehicle market this year. The company claims to have grown its share in the segment by 12 points to 16 percent while taking a high number of Toyota Prius trade-ins in the process. Conversely, Toyota has experienced a five-percent drop in new-Prius sales over the same period. Additionally, Ford states that it has increased its share of the US vehicle market by one percent this year, more than any full-line automaker.

We're sure Ford will be monitoring the fuel mileage of its hybrid fleet closely with the hopes of seeing significant improvements, though the automaker offers the expected 'Your mileage will vary" disclaimer, which you can read all about in the press release below.

DEARBORN, Mich., July 16, 2013 – As Ford's share of the U.S. electrified vehicle market has quadrupled in the past year, the company is announcing improvements to the on-road fuel economy performance of its hybrid vehicles, hiring new engineers, and expanding its research facilities for expected continued growth.

This year, Ford's share of the U.S. electrified vehicle market is up 12 share points to nearly 16 percent, while Toyota's share is down 8 share points, and more customers are trading in their Priuses for the new Ford C-MAX Hybrid.

"Strong consumer acceptance of Ford hybrids shows that our plan to lead in fuel economy across our lineup is working," said Raj Nair, group vice president, Global Product Development. "Our commitment to deliver great fuel economy in our cars, utilities and trucks is a key reason we are seeing strong growth in coastal markets and with import buyers."

Ford reported electrified vehicle sales of 46,197 units through June – more than 400 percent higher than the same period a year ago. Ford C-MAX Hybrid and Ford C-MAX Energi plug-in hybrid are helping drive this growth. C-MAX is drawing new buyers in coastal markets and in Florida and Texas, as Toyota Prius U.S. sales have declined 5 percent. Meanwhile, the Ford brand had the largest retail share increase in California of any brand during the first five months of 2013, based on the latest Polk retail registration data.

Last month, 64 percent of C-MAX Hybrid buyers came from non-Ford brands. In fact, the vehicle most traded in for a Ford C-MAX is Toyota Prius.

Lincoln MKZ also is bringing new customers into the showroom. Strong demand has led Lincoln to increase the production mix of MKZ Hybrid to 40 percent of MKZ production, up from 20 percent.

Electrified vehicles part of larger Ford success story
The company's strong product lineup has led to Ford's U.S. market share growing at a faster rate than competitors – gaining nearly a full percentage point through the first half of the year. The Ford brand also achieved the fastest retail share growth of any automotive brand on the coasts, up almost 2.5 percentage points compared with 2008, based on Ford's analysis of Polk retail registration data.


Consumer demand is strong across the company's lineup – with its fuel-efficient cars, utilities and trucks all showing gains this year.

One example is the Ford brand's coastal retail passenger car share, which is up more than 1 percentage point and growing at about three times the rate of the industry.

Another success is in what Ford calls the "super segment" – small cars, midsize sedans and small utilities that have fueled 42 percent of the company's overall growth since 2008. Ford's small cars, including Fiesta, Focus and C-MAX, totaled 35,851 sales last month, a 39 percent increase over last year and the company's best June small car sales in 13 years.

Ford Fusion has seen record sales for the first half of the year, and Escape continues to be the best-selling utility in America – posting record sales the last five months.

Overall, Ford is on track to be the best-selling brand of utility vehicles for three straight years. Ford F-Series has been America's best-selling pickup for 36 straight years; it sold more than 367,000 trucks during the first half of the year – a 22 percent increase over last year.

"We are committed to continuously improving the fuel economy of our vehicles," said Nair. "We believe these actions will provide our customers enhanced on-road fuel economy satisfaction."

Calibration updates to Ford hybrid vehicles include control system enhancements for a variety of driving conditions on the highway, during short trips and while using the climate control system. Enhancements designed to improve customer satisfaction include:

Increasing the maximum pure electric speed to 85 mph from 62 mph, allowing increased use of electric-only mode on the highway
Optimizing the use of Active Grille Shutters to reduce aerodynamic drag under more driving and temperature conditions including cold weather, during air conditioner use and when the engine coolant temperature is higher
Reducing the electric fan speed as a function of coolant temperature to minimize the fan's energy consumption
Shortening engine warm-up time by up to 50 percent to enable electric-only driving and engine shutdown at stops sooner after cold starts
Optimizing the climate control system to minimize use of the air conditioning compressor and reduce the energy used in cold weather operation

"Just as individual mileage can vary based on driving styles and environmental conditions, we expect fuel economy improvements will differ from customer to customer depending on individual driving habits," said Nair. "Customers should see the most improvement at highway speeds, during air conditioner use and operation in colder climates."

Expanding for the future
This year, Ford also will expand its electrification engineering team by nearly 50 percent, growing to 500 salaried employees. Further, the company is investing an additional $50 million in electrified product development and testing centers in Dearborn.

Ford will double electrification battery-testing capabilities by the end of the year – to a total of 160 individual battery-test cells – helping to speed hybrid and electric vehicle development by as much as 25 percent.

"This investment in new engineers and expanded facilities helps us prepare for growth," said Nair. "All of us at Ford remain absolutely committed to offering customers a choice of leading fuel-efficient vehicles – from EcoBoost®-powered gasoline engines and hybrids to plug-in hybrids and electrified vehicles."