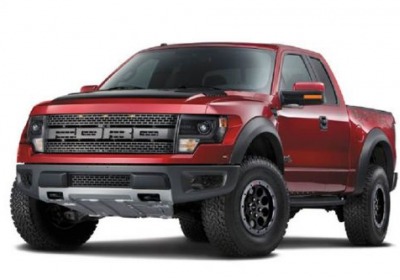 Ford has pulled the wraps off its anticipated 2014 F-150 SVT Raptor Special Edition model, a new variant of the popular street-legal off-road specialist. In a nutshell, the "special" is all cosmetic – there are no mechanical upgrades to the truck and its 6.2-liter V8 (411 horsepower and 434 pound-feet of torque), Torsen limited-slip differential, beadlock-capable wheels and internal triple-bypass FOX Racing Shox dampers all remain untouched.

As of now, Ford has only release a couple pictures of the Special Edition model. But check back later, as we will update the gallery when additional high-res images are released later today, and be sure to peruse the press release below for all the details.

[Ford has released seven images - all have been added to the gallery.]

"Raptor owners are looking for a high-performing, uncompromising off-road pickup truck with the features and luxuries found in today's premium trucks," said Doug Scott, Ford truck group marketing manager. "Since its launch in 2009, we've continually moved Raptor forward in capability and design, and the 2014 Special Edition is the best Raptor yet."

Raptor has found an enviable niche in full-size pickups. SVT Raptor sales are up 14 percent in 2013, with five out of the past six months seeing record sales. More than 13,000 Raptors were sold in 2012.

A Raptor development imperative has been continuous improvement, so Ford expanded Raptor's footprint for 2011 with a four-door SuperCrew model joining the two-door SuperCab original.

For 2013 industry-exclusive beadlock-capable wheels were added to help increase grip in low-traction conditions, along with high-intensity discharge headlamps for improved visibility. SYNC® with MyFord Touch® was also made available for added connectivity.

The front axle features a Torsen® differential with 4.10 to 1 gearing. The rear axle is also 4.10 to 1, with an electronic-locking differential.