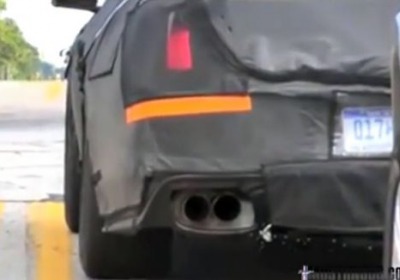 We just recently saw our first spy shots of the next-gen hi-po Ford Mustang slated to replace the Shelby GT500, but now we're getting our first look – and listen – of prototypes captured on video. Mustang6g.com has the video (along with some different spy shots), which show that, if nothing else, SVT knows how to tune an exhaust system. The :50 mark is a good example of this, but fast-forward to around 2:00 where the driver revs the engine and really gets on the throttle hard taking off from a stop.


There's still no definitive evidence that the next-gen SVT Mustang – said to be called GT350 – will be naturally aspirated, but it sounds just as menacing as the current Shelby GT500. While the video posted below exhibits the sort of quality that is to be expected from someone driving while trying to film someone who is attempting to elude being filmed, it's still exciting to see and hear this new Mustang in motion.