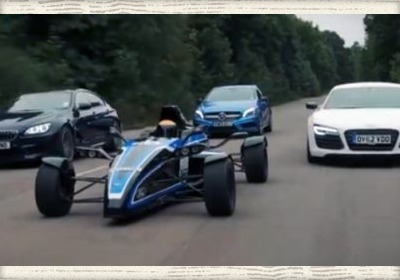 Ford has quite the racing pedigree, but usually, its racers are relegated to the track. Not the new Formula Ford EcoBoost, though. It's a turbocharged, open-wheeled racer complete with a 200-horsepower, 1.0-liter, three-cylinder engine... and it's legal on the roads of the UK.

That's stressed in this video from Autocar, with the mag going so far as to show the car's tax disc and license plates. Being a road-legal offering, it's tempting to see just how well an open-wheeler that delivers racecar-like performance while also netting over 100 miles per gallon (assume this is on the British cycle, for obvious reasons) stacks up against modern performance cars.


Autocar lined up the Formula Ford against an Audi R8 V10, a BMW M6 Gran Coupe and a Mercedes-Benz A45 AMG in a number of situations to see which would come out on top. Take a look below for the full video.