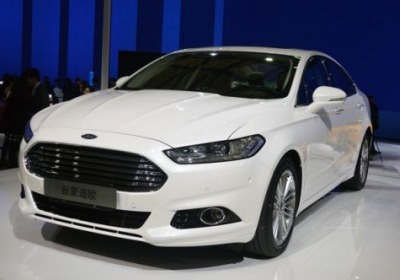 Does the car above, posing fancifully in white, look familiar? Well, it should. Although it wears Mondeo badges in the form you see above for the Chinese market – as it does in Europe – the car is basically the same thing sold in the US as the Ford Fusion. Of course, it's what's under that shapely skin that counts.

Ford has chosen the Shanghai Motor Show as the venue with which to unveil its 1.5-liter EcoBoost four-cylinder engine. We'd heard about the engine before, but now we have a few performance estimates to share: 133 kW of power (about 178 horsepower) and 240 Nm of torque (about 177 pound-feet).

Those numbers pretty much confirm previous rumors indicating about 177 in each category, and it's right on par with what Ford's own 1.6-liter EcoBoost produces. Ford is claiming best-in-class fuel economy as well, but no specific figures have yet been provided. In any case, we'll surely have all the data soon enough, as the 1.5-liter mill is destined for the US Fusion in 2014.

Built on Ford's global C/D-segment platform, the refined Ford flagship is one of 15 global vehicles the company has promised to bring to the country by 2015. Featuring a sleek silhouette and fresh face, the all-new Mondeo will be available as a four-door sedan in Asia.

"We've gone further in every aspect to bring to China the most premium Mondeo we have ever designed, developed and built," said Marin Burela, president & CEO, Changan Ford Automobile Co., Ltd. "The all-new Mondeo is designed to stir the senses and transform expectations of what a car can be. It's truly a flagship car, offering our Chinese customers class leading levels of refinement, driving pleasure and excitement. The Mondeo will raise the bar in craftsmanship, style and technology- delivering what we believe our loyal Chinese customers truly want and value."

The design team was guided by five elements as they sketched out the Mondeo:

The all-new Mondeo is the first Ford to feature headlamps with LED high-beam, low-beam and signal lighting. Quicker to illuminate, more durable and energy efficient than traditional filament bulb headlamps, Mondeo's LED headlamps turn with the steering and adapt beam projection to vehicle speed – providing a greater depth of illumination at high speeds and a wider field of vision at lower speeds.

Scoring yet another first among competitors, Mondeo comes with Ford's Multi-Contour Seats with Active Motion™, which contain 11 air cushions that pad the driver's and passenger's entire back – three for lumbar support, four for the seat pad and four for side support. The bottom cushion features Active Motion technology, which provides subtle, continuous massage, designed to lessen back pain on long trips.

The interior delivers exceptional levels of ergonomics and comfort, with superior craftsmanship throughout the driver-focused cockpit. A higher centre console supports the driver-centric theme and yields clever storage for items a driver wants to keep handy. Additional passenger space was designed in by moving the instrument panel toward the windshield, contributing to the cabin's airy, open environment.

Paying attention to detail, Ford also gave the interior soft-touch materials and made sure interior and exterior gaps are minimised. Extra care also has been taken to upholster or cover each edge and every surface a customer can touch. When the boot lid is opened, for example, a spring-loaded cover automatically conceals the boot latch hardware.

Mondeo watches out for you
The all-new Mondeo is the first vehicle in China to be equipped with the innovative rear inflatable seat belts, which combine attributes of an airbag and conventional seat belt. These are designed to reduce head, neck and chest injuries for rear seat passengers, especially children and older passengers who are more vulnerable to such injuries. In the event of an accident, the belt rapidly expands to disperse crash forces across a body area five times greater than that achieved by a conventional seat belt.

As with an airbag, Ford's rear inflatable seat belt is activated when crash sensors detect an accident. This forces compressed gas out of a cylinder housed below the rear seat, through the buckle and into the belt, which is fully deployed in less than 40 milliseconds. Unlike airbags that generate heat when deploying, Ford's rear inflatable seat belt uses cold compressed gas.

- MyKey®: This innovative feature promotes safer driving behaviour by allowing owners to limit top speed and audio volume, set speed warnings, encourage safety belt usage and ensure safety features are not disabled, when allowing use of their car
- Auto high-beam control: Preventing accidental dazzling of drivers, this feature relies on a sensor that detects oncoming vehicles and automatically switches to dipped beam, before switching back to high-beam once it detects the vehicle has passed

Entertainment just a command away
The all-new Mondeo offers the latest iteration of Ford's award-winning, industry-exclusive SYNC® communications and entertainment system, which enables voice-activated communication through a driver's mobile phone and interaction with the car's audio system.

Available in English and Mandarin, SYNC with MyFord Touch allows the driver to interact with vehicle systems such as climate control, radio and CD player through voice commands, an eight-inch colour touch screen, as well as a conventional button.

SYNC with MyFord Touch helps reduce the potential for driver distraction through voice-controlled functionality, allowing drivers to keep their hands on the wheel and eyes on the road.

As an added bonus for customers in China, rear passengers can select and control the music from the audio buttons in the centre armrest at the back. They can even move the front passenger seat forward for more legroom at the touch of a button on the side of the seat.

Brand-new global EcoBoost engine
The new 1.5-litre EcoBoost engine will debut on the all-new Ford Mondeo. It is the fifth and latest member to join Ford's global family of EcoBoost engines, which includes a 1.0-litre three-cylinder, 1.6- and 2.0-litre four-cylinders, and two 3.5-litre V6 variants.

EcoBoost is Ford's global franchise for delivering the fuel economy customers demand along with the outstanding performance they expect. By the end of 2013, nearly 80 percent of Ford's global nameplates will be available with EcoBoost, with approximately 1.2 million of these turbocharged engines expected to be on the road globally.

Ford's EcoBoost technology, which holds more than 125 patents, combines direct fuel injection, turbocharging and variable valve timing to enable a downsized engine to gain fuel economy by up to 20 percent over larger engines with no loss of performance. It also delivers up to a 15 percent reduction in CO2emissions

The 1.5-litre EcoBoost engine is projected to produce 133 kW of power at 6,500 rpm and peak torque of 240 Nm from 1,750 to 4,500 rpm. It includes an integrated intake manifold and water-cooled charge air cooler, which allows for a more efficient feed of air into the engine, and a clutch-controlled water pump that delivers fuel efficiencies by reducing the warm-up time of the engine. EcoBoost also features specific technologies to reduce noise, vibration and harshness, delivering an engine that is quiet and refined.

Other than the 1.5-litre EcoBoost powerplant, the all-new Ford Mondeo also will be available with the 2.0-litre EcoBoost engine, which serves up 178 kW of power at 5,500 rpm and 350 Nm of peak torque at 3,000 rpm. Both engines will be mated with Ford's fuel-efficient six-speed automatic transmission.

Safe and smooth
Available with up to seven airbags, the all-new Mondeo is designed with customer safety in mind. Engineers increased its body strength by 10 percent, using ultra-high-strength steels such as boron, which also reduced overall weight for improved fuel economy.

Ford also debuts an all-new premium-level integral link suspension configuration on Mondeo to improve ride comfort and noise reduction, especially for passengers in the rear. Combine it with the electric power-assisted steering, and Ford Mondeo becomes a joy to handle and drive, with a dynamic character that will please a well-seasoned enthusiast and increase the confidence level of less-experienced drivers.

Interior quietness on the all-new Mondeo reaches a new level with acoustic underbody shields and weight-saving sound-absorption material – both minimise road and powertrain noise while boosting aerodynamic efficiency to help save fuel. A full-perimeter bonnet seal takes the Mondeo all the way to the top of its class in giving drivers a quiet ride.

The new Mondeo also is equipped with Ford's Emergency Assistance, which provides peace of mind and reassurance to both driver and occupants. This free service utilises the driver's mobile phone and – using SYNC – is designed to automatically inform emergency services via a dedicated call centre in the event of an accident.


About Ford Motor Company
Ford Motor Company, a global automotive industry leader based in Dearborn, Mich., manufactures or distributes automobiles across six continents. With about 171,000 employees and 65 plants worldwide, the company's automotive brands include Ford and Lincoln. The company provides financial services through Ford Motor Credit Company. For more information regarding Ford and its products worldwide, please visit http://corporate.ford.com.