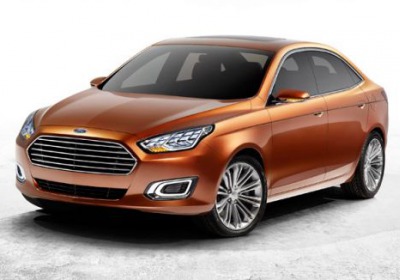 Here's the thing about China: The folks buying cars there have a very different set of standards than shoppers in many other markets around the globe. While we all drool over hot metal with bold designs, and while we appreciate automakers going an extra step to inject even their cheapest offerings with aggressive and interesting cues, that sort of sheetmetal sex appeal doesn't always sell in the People's Republic. Case in point is Jaguar, which may be designing a more traditional-looking version of its XJ for the Chinese market, or more to the point of this story, Ford currently sells the less-exciting, last-generation Focus compact in China right alongside the new one.

So consider this new Shanghai-bound C-segment concept a preview of what's to come for that more traditional, budget-minded, less-sexy market. More proof of this pudding: Ford's even calling this concept the Escort – a nod to the Blue Oval's compact car days of yore, and a name that stirs up thoughts of basic, affordable transportation rather than great driving dynamics or bold design. "Customers in China described seeking a vehicle that is stylish – but not one that is arrogant or pretentious," Ford states. And this new Escort concept previews a possibility of providing exactly that for this rapidly expanding automotive market.

What you're looking at, then, is one of the most simple Ford designs we've seen of late, though it still incorporates all of the automaker's latest DNA. The signature hexagonal grille is front and center, flanked by attractive LED headlamps and chrome-rimmed foglamp housings. The entire car's design focuses on clean, smooth surfaces, with one strong character line flowing from front to back just below the beltline. We will say that the car looks decidedly more premium from the rear view, where narrow, horizontal taillamps with an LED accent give the car added visual width. Bland as it may be, it's a handsome little concept, though fear what would likely happen if all of the conceptual details get dumbed down for a production model.

We aren't able to see inside the concept, and no details have been released about what might lie under the hood. Ford is mostly using the Escort as a way to show Chinese customers what could be in store for a future product offering, especially since the automaker is committed to bringing 15 new products to China by the year 2015. Ford even plans to build five new plants in China by 2016 as part of a larger plan to open seven facilities throughout Asia-Pacific, with enough capacity to produce roughly 2.7 million vehicles annually in the region.

In addition to the Escort Concept, Ford will use the Shanghai Motor Show to debut the Chinese-market Mondeo, complete with its new 1.5-liter EcoBoost inline four-cylinder engine, as well as the new Fiesta ST. Scroll down for the full press blast.