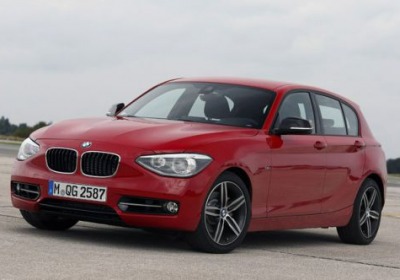 Downsizing For BMW's Front-Wheel-Drive And i Futures

The red five-door BMW 1 Series seen in this photo gallery has little to do with what is actually of importance here. What we've just tested at an airfield not far from Munich, Germany, is a new 1.5-liter TwinPower Turbo inline three-cylinder gas engine that we'll be hearing an awful lot about in the coming few years.

This engine, codenamed B38, made its public debut in the well-received Concept Active Tourer at the 2012 Paris Motor Show, alongside other BMW innovations that were tucked into the CAT. Besides this new Efficient Dynamics engine clan of three-, four-, and six-cylinder units thus launched, the CAT uses a front-wheel-drive chassis, and is a plug-in hybrid electric. That's a lot of fresh tech in a small space. And, oh yes, the CAT is an MPV.

But let's focus on driving this B38 amongst the well-laid-out cones. There will no doubt be a few three-cylinder capacities eventually created – a 1.2-liter is in the works as well – but it is this 1.5-liter that will be most involved in the BMW Group's small capacity revolution. On this roughly 3,000-pound 1 Series prototype, the initial output of this single twin-scroll turbo-fed triple is quoted at 175 horsepower at 5,000 rpm, plus 200 pound-feet of torque starting at 1,500 rpm. The BMW experts on hand say the prototype can hit 62 miles per hour (100 kmh) in 7.0 seconds.

These engines will be able to deal with all of the less pure blends of unleaded.

The tech approach here is reliant on a couple of issues. First, for this B38 and the almost identical B37 diesel version, the magic capacity is 500cc per cylinder. The other issue regards abandoning the stratified part of stratified direct fuel injection.

A cylinder capacity of 500cc, according to BMW engineers' detailed matrices and explanations, is the happy medium if we want the maximum in both sound and low vibrations together with greater efficiency, reduced mechanical friction and fewer parts with lower mass. And BMW's messaging with this new engine philosophy clearly shows a 3.0-liter inline six-cylinder simply being sliced into two halves to create this three-cylinder.

Getting rid of the technical bell-and-whistle of stratifying your direct-injected fuel means that these engines will be able to deal with all of the less pure blends of unleaded that pour from the pumps in countries like Russia, China and the United States. So the business case clearly calls for these various three-cylinder powerplants to eventually replace a few of BMW's existing four-cylinders on a global basis.

All we can say is that the sound is uniquely pleasing.

We took a few laps of the setup course in this rear-wheel drive hatchback, trying various calibrations of the throttle, gearshifts, and so on. The first thing that became apparent is that BMW has been working hard on making this three-cylinder still sound like a Bimmer that BMW fans would happily buy instead of a cracking four-pot. Engineers on hand wouldn't go into exactly what has been done with the manifold or pipes, but the prototype sounded really fine to us. And two- and three-cylinder engines definitely have their own alto/baritone note. Add the twin-scroll turbo cranking up to 14.5 PSI of boost pressure, and all we can say is that the sound is uniquely pleasing.


Another issue, especially with three-cylinders, is vibration mainly from fore-aft jiggling along the axis of the cylinder bank and crankshaft. This can also sometimes create an almost pleasing massage for the feet and butt, but you really don't want this going on. The engineers in this case have designed a counter-spinning balance shaft that passes through the crankcase beneath the crankshaft. It works and the engine proved smooth and responsive throughout all the types of driving we experienced.

Our transmission was the ultra-efficient eight-speed automatic, whose many shorter gears succeed in mating well with the potentially uppity little three-cylinder. Whether set in Comfort mode or Sport+ of Driving Dynamics Control, all went well, even when we hammered it to the 7,000-rpm redline and yawed our way around the mighty plastic cones. But then in normal loping mode, everything was pretty unremarkably fine as well – and that's not a criticism.

Regarding BMW's three-cylinder strategy (transverse or longitudinal, by the by) with Valvetronic versus, say, the VW Group's current commitment to cylinder deactivation, the Munich boffins told us that having a smooth and constant variation of input/output via Valvetronic versus the on/off quality of cylinder deactivation actually produces greater overall efficiencies, fewer mechanical complications and compensation, and more consistent thermal benefits throughout the engine.

Between the three-cylinder B38 gas and B37 diesel, the main stamped parts are identical, with the commonality overall reaching up to 40 percent whether with this three-cylinder or the future four- and six-cylinder motors that will follow this new direction. Across three-, four- (B48 and B47), and six-cylinder (B68 and B67) gas or diesel lineups, the commonality reaches over 60 percent. So there are obvious economies of scale and sharing that will come into play as well.

As for this 1.5-liter turbocharged engine, look for it to replace all of the current 1.6-liter treatments in the Mini lineup in addition to replacing all of the lesser capacity fours in the BMW lineup. That is to say, no more collaboration on such motors with PSA Peugeot Citroën. This all starts in the middle of 2013 in Europe and then migrates worldwide. And the upcoming i range of alternative premium vehicles will depend heavily on this exact three-cylinder 1.5-liter, to be seen most significantly in the rakish i8 green supercar.

Can we embrace this three-cylinder turbo in a BMW? Yes.

Most crucially, this entire strategy gives BMW a significant leg up on rivals like Mercedes-Benz, Lexus and others who will need to differentiate into smaller segments and engines to survive the stormy sales climate out there. Or they could just buy it all from BMW...

Can we embrace this three-cylinder turbo in a BMW? Yes. Does it feel cheap and are we just pandering to a BMW bias? No. This is a legitimate and significant move that's long been in the planning stages, not a fluke. It'll be put to use in every model below the 5 Series, we are told.

But what about the proliferation of front-wheel drive into BMWs and not just Mini? We'll have to wait and see, since that wasn't tested here. We suppose that depends on how far across the lineup they choose to spread out the technology...

See also: Audi to spend $17 billion to fight BMW, A look back on BMW, South Carolina and Southern manufacturing, BMW M6 amped up for track duty by Risden.