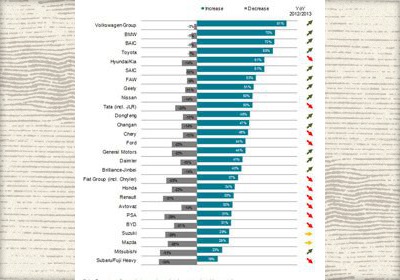 A new survey of top global automotive executives indicates both Volkswagen and BMW are the most likely to grow their market share over the next five years.

Tax advisory firm KPMG LLP has released its 14th annual Global Automotive Executive Survey, which includes responses from over 200 executives. A total of 81 percent of respondents said they expect to see Volkswagen make gains, compared to 70 percent last year. BMW, meanwhile, saw 70 percent of those surveyed say they believe the company will increase its market share. That's a jump of 7 percentage points over last year. This is the first time in the history of the survey that BMW has claimed the second-place spot.

Meanwhile, Hyundai has seen its perceived market share potential slacken for the third year in a row. Around 61 percent of those surveyed predicted gains for Hyundai, down from 63 in 2012. Toyota also has a surprising year, but for just the opposite reason. While the manufacturer had slipped in ranking since 2011, it enjoyed the largest increase of any company in the 2013 survey, jumping to 68 percent from 44 percent last year.

You can read the full press release below for more information, or click on the graph above (expandable) for the full list.

For the third consecutive year, the KPMG survey of 200 C-level global auto executives found that Volkswagen is the automaker most likely to gain market share over the next five years. In fact, 81 percent of respondents expect gains for VW, up from 70 percent in last year's survey. BMW also saw a significant increase this year, jumping to 70 percent from 63 percent a year ago. For the first time in the survey's 14-year history, BMW places second among the major automakers predicted to gain share, ahead of perennial favorites Hyundai and Toyota.

Since 2011, executive perceptions of Hyundai's ability to gain market share have receded. In the 2013 survey, 61 percent predict gains for the automaker, down from 63 percent in 2012 and 72 percent in 2011. Conversely, Toyota, which historically has fared well in the survey, experienced two down years in 2011 and 2012 but experienced the largest increase of any automaker this year – 68 percent of execs predict market share gains for Toyota, up from just 44 percent last year and 40 percent in 2011.

"Volkswagen continues to be a powerhouse, with consistent market share gains in the U.S. and abroad," said Gary Silberg, national automotive industry leader for KPMG LLP. "It is very interesting to see a luxury brand like BMW jump into the second spot, a sign that the automaker's strategy and vehicles continue to impress the industry. The most noteworthy finding was the dramatic increase for Toyota, an illustration that the company is moving past the recalls and other issues of the past two years and looking to regain its prominent position among the global auto giants."

Continuing the trend of the 2011 and 2012 KPMG auto surveys, many executives also think Ford, GM and Chrysler are likely to grow market share. In fact, GM's projections jumped six percentage points among global execs to place the OEM in a tie with Ford for 6th out of the 15 major OEM market share projections. This optimism represents a complete turnaround from KPMG's 2009 survey, when Ford, General Motors and Chrysler were emerging from their respective restructuring and two-thirds of executives expected the OEMs to lose market share through 2013.

"Clearly the investments in new products and product innovation that the U.S. OEMs have made over the over the past several years have helped U.S. auto manufacturers become more competitive," said Silberg. "Moreover, it is a clear indication that perceptions of U.S. automakers and auto quality continue to improve."

Silberg added, "As recent sales figures demonstrate, U.S. OEMs have much stronger product portfolios, and as a result they are recording record profitability despite a sluggish economy."

"The Chinese OEMs continue to be perceived winners," said Silberg. "But, given their lower current base market share levels, it is not surprising to see predicted market share growth for brands such as BAIC and FAW, although the majority of that growth will come from their domestic markets in the short-term."

The brands most often predicted to lose market share in the 2013 survey include Subaru, Mitsubishi, Mazda and Suzuki. According to the KPMG survey, executives say the BRIC countries will see the most significant increases in domestic vehicle production and sales over the next five years, and Mexico continues to gain momentum as a production hub.

For the KPMG Global Automotive Executive Survey 2013, KPMG interviewed 200 C-class global automotive executives, including 22 from North America, representing vehicle manufacturers and suppliers, in November 2012. KPMG has released an annual survey of automotive executives expressing their views on the state of the industry since 1999.

See also: VW looking to MAN up, ditch Mercedes van deal, Hyundai and Rhys Millen reunite, will return to Pikes Peak with new RWD racer, Genesis Coupe, Are you the next BMW X5?.