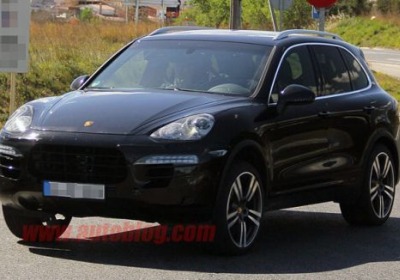 Although it's only been a few years since the current Porsche Cayenne was introduced, Porsche seems to be working on a midcycle update for its big SUV possibly in time to welcome the smaller Macan. As seen in these recent spy shots, it looks like the Cayenne will be getting a minor face- and butt-lift, but it's hard to say what other changes are in store or when the updated model will hit showrooms.


Up front, expect the Cayenne's new face to resemble what was just revealed on the 2014 Panamera, and we could also see this SUV using some of the new engines introduced on the Panamera including the 3.0-liter twin-turbo V6 or maybe even the E-Hybrid model. We're guessing that the new Cayenne could debut sometime next year likely for the 2015 model year. In the meantime, check out the gallery of spy shots above.