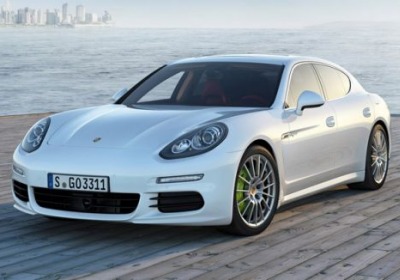 Porsche will officially unveil the refreshed 2014 Panamera at the Shanghai Motor Show later this month, and there's a whole lot in store for the updated model, far beyond the minimal styling tweaks you see here. Sure, there's a new fascia with more prominent LED lighting (including full LED headlamps) and the rump has been tweaked ever so slightly, but the big news for 2014 concerns what's underneath that rakish skin.

First up, Porsche will now offer a Panamera S E-Hybrid model – a plug-in hybrid that builds on the technology first introduced in the Panamera S Hybrid that we tested in 2011. For this new application, a more powerful electric motor and higher-performance battery have been fitted (official specs have not been released just yet), and Porsche says the battery can be recharged in just two and a half hours when the car is plugged in to a 240-volt outlet, and the charging (as well as other vehicle data) can be monitored via a new Porsche Car Connect app available for Android and iOS devices.

The E-Hybrid will have an all-electric driving range of "greater than 20 miles" and will be able to travel at speeds up to 84 miles per hour solely on electric power.

As for performance, the E-Hybrid will reportedly have an all-electric driving range of "greater than 20 miles" and will be able to travel at speeds up to 84 miles per hour solely on electric power. And because this is a Porsche, performance has not suffered – the automaker says the Panamera S E-Hybrid will be able to hit 60 mph in 5.2 seconds on its way to a top speed of 167 mph. Total system output for the E-Hybrid is rated at 416 horsepower and 435 pound-feet of torque, and an eight-speed Tiptronic S transmission will be used with this application.

Speaking of performance, Porsche will be offering a new 3.0-liter twin-turbocharged V6 engine in the Panamera, which replaces the naturally aspirated 4.8-liter V8 from the S and 4S models. This new engine is good for a power increase of 20 horsepower and 15 pound-feet over that V8 (bringing the final numbers up to 420 and 383, respectively). While official fuel economy numbers haven't been released just yet, we're told that this new engine, combined with the standard seven-speed dual-clutch transmission and auto start/stop, will offer significant fuel economy improvements.

Lastly, and perhaps most fitting to the car's planned debut in China, Porsche will be offering extended-wheelbase versions of both the Panamera 4S and Turbo. Called the Executive models, these cars offer 5.9 inches of extra length in the wheelbase, and come standard with "an extensive range of standard features," including Porsche's adaptive air suspension with Porsche Active Suspension Management (PASM).

Further, S models are now powered by an entirely new 3.0-liter V6 engine with twin turbochargers. The broadest model range in its class has been further expanded, now consisting of nine models for the U.S. market. New and further-developed technologies offer improved performance while also enhancing fuel efficiency and comfort. The new Panamera is characterized by tighter lines, more pronounced contours and newly shaped body elements. The refreshed Panamera celebrates its world debut at Auto China in Shanghai, which opens on April 21, where further details on the new models will be revealed.

The Panamera S E-Hybrid expands upon the driving performance of the previous generation, while fuel consumption is reduced when compared to the previous Panamera S Hybrid. Final U.S. EPA fuel economy ratings will be available closer to launch. Simultaneously, its electric-only driving performance is substantially improved, enhancing acceleration, range, and top speed. Electric-only driving is possible without any fuel consumption or local emissions, which is especially advantageous in city driving. The electric driving range of the Panamera S E-Hybrid is estimated to be greater than 20 miles based upon current NEDC testing. Driving range may vary in real world operation, due to the effects of environmental conditions, terrain, air conditioning and heating use, driving style and other factors. The Panamera S E-Hybrid can reach up to 84 mph in all-electric operation.

The car's top track speed is 167 mph. The parallel full hybrid system developed by Porsche also offers "coasting" at higher speeds, a mode wherein the internal combustion engine is turned off and the electric motors use vehicle momentum to generate electricity that is stored in the lithium-ion battery.

The Panamera S E-Hybrid also includes an entirely new range of convenience functions which can be activated and operated by Porsche Car Connect, a mobile app available for Android and iOS-powered devices. These functions include a charge status indicator and the ability to control the vehicle's new auxiliary climate control option, which enables vehicle preheating or cooling via the Porsche Car Connect app. These functions can also be programmed from inside the vehicle. A mobile device may also be used for remote access to vehicle information, such as remaining driving range or vehicle location. Other functions not specific to the hybrid drive will also be available as options for other Panamera models via the Porsche Car Connect mobile app.

More performance and efficiency in a smaller powerplant: the new twin-turbo V6 engine

Increasing both performance and efficiency has long been a core Porsche philosophy. In the new Panamera, this approach takes form in a 3.0-liter V6 engine with twin turbochargers. The twin-turbo V6 replaces the naturally aspirated 4.8-liter V8 engine in the previous-generation Panamera S and Panamera 4S. The new bi-turbo engine is also used in the Executive version of the Panamera 4S. The engine's figures themselves are indicators of progress: increases of 20 hp and 15 lb-ft torque when compared to the outgoing V8 engine. Carefully-managed turbocharging ensures that the maximum 384 lb-ft torque is available across most of the twin-turbo V6's operating range.

With the exception of the Panamera S E-Hybrid, all Panamera models are equipped with the seven-speed Porsche Doppelkupplungsgetriebe (PDK); the Panamera S E-Hybrid uses the eight-speed Tiptronic S automatic. The PDK transmission works in tandem with other vehicle systems to enhance fuel savings in the new generation Panamera. For example, the optimized engine Auto Start Stop feature now turns the engine off earlier while coasting to a stop. With the exception of the Panamera GTS, models with PDK also offer a coasting function in which the clutches open in overrun allowing the engine to idle and the vehicle to coast freely. This function can significantly improve fuel economy, especially when traveling on the highway.

Exterior design changes of the new Panamera are extensive. The tighter and more prominent lines up front are especially apparent in the larger air intakes and the transition to the headlights. Perhaps the most distinguishing feature of the new generation Panamera is a new trunk lid; its laterally stretched glass emphasizes the vehicle's width and makes for a more aggressive stance. Rear body proportions were also changed. A larger automatically deploying spoiler and a tighter transition to the rear lights complement the treatment at the front of the vehicle noted above.

The new Panamera continues the tradition of multiple options that enable owners to customize the look and function of their vehicles. Full-LED headlights, which lend the new generation a striking appearance, are now an option.

In addition, an expanded lineup of assistance systems is available for safety and convenience. The revised adaptive cruise control system is now offered with Porsche Active Safe (PAS). This system visually and audibly alerts the driver in the event of a sudden decrease in following distance and briefly tugs on the brakes. It can also intervene in the braking process and apply increased braking pressure in an emergency braking situation, if required. Another new feature, camera-based lane departure warning, offers greater convenience and safety in city and highway travel.

*Base pricing does not include options, taxes, dealer charges, and a destination fee of $975.