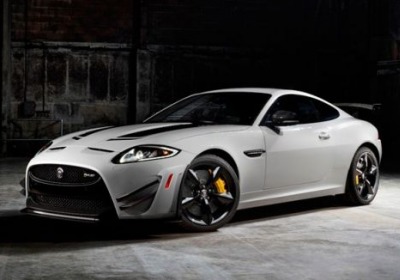 If there were any car to overshadow the 542-horsepower Jaguar XJR that's coming to the New York Auto Show, this is it. Meet the Jaguar XKR-S GT – a street-legal, higher-performance version of the already hardcore XKR-S that will be headed to North America in very limited quantities. Only 30 will be offered on our continent, with 25 earmarked for the United States and the remaining five going to Canada. The cost of entry? $174,000 when it goes on sale this August.

What that gets you is a coupe that is, without any doubt, ready to attack any racetrack it might encounter. The XKR-S' supercharged 5.0-liter V8 has not been upgraded in terms of power – not that 550 horsepower and 502 pound-feet of torque is anything to sneeze at – but instead, Jaguar focused on tuning the bits of the car that help effectively put all that grunt to the ground. There's a new hood with rows of louvers to aid in engine cooling, and elsewhere on the car's body, you'll find carbon fiber on the redesigned front air splitter, dive planes, extended wheel arch spats, as well as a new rear diffuser, an aluminum front under tray and an absolutely massive wing out back to keep downforce to a maximum.

Underneath that hot body are retuned and height-adjustable adaptive dampers; spring rates have been increased by 68 percent in front and 25 percent at the rear versus a standard XKR-S. Most of the front and rear suspension geometry has been upgraded, larger carbon ceramic brakes have been fitted at all four corners, and wider 20-inch forged alloy wheels are found here, wrapped in Pirelli Corsa tires – 255/35-series rubber in front and 305/30-series stuff out back. There's also a revised active exhaust system, which should only improve the already thunderous roar coming out the back of the Jag coupe, and a faster steering rack has been added for improved agility.

This all sounds very, very good, and we can't wait to get a look at the XKR-S GT in person later this week. Scroll down for all of the details in Jaguar's press blast.

- The 2014 Jaguar XKR-S GT is a track-ready and street legal version of the XK Coupe
- Developed by the Jaguar ETO division, an in-house specialty vehicle group
- Constructed on an all-aluminum body structure, assembled using aerospace derived aluminum bonding and riveting techniques
- A limited production run of just 30 cars for North America; 25 for the US and 5 for Canada
- The XKR-S GT features bespoke aerodynamic components to increase down force, and has new suspension and steering systems designed to maximize high-speed cornering ability2
- Achieves a maximum down force of 320lbs (145kg) through the addition of aerodynamic aids including a carbon-fiber front splitter, dive planes, extended wheel arch spats, an elevated rear wing, rear diffuser and an aluminum undertray
- The XKR-S GT reaches 60mph in 3.9 seconds with an electronically limited top speed of 186mph (300km/h)2
- Powered by a 550hp, 502 lb/ft supercharged 5-liter V8 engine coupled to a six-speed ZF automatic transmission and active electronically controlled rear differential
- Equipped with a carbon ceramic brake system which features 15.7-inches (398mm) and 15.0-inches (380mm) discs front/rear gripped respectively by six- and four-piston monoblock calipers. This is the first time such a brake system has been fitted to a production Jaguar vehicle
- Suspension changes include: a wider front track, increased camber, revised bushings, a new steering system and faster steering ratio
- Height-adjustable adaptive dampers feature a race-derived twin spring system, spring rates increased by 68% at the front and 25% at the rear
- Active exhaust system for reduced backpressure and enhanced aural character
- Wider 20-inch lightweight forged alloy wheels are designed to maximize brake cooling and are shod with 255/35-20 and 305/30-20 Pirelli Corsa tires
- MSRP1 is $174,000 with cars arriving in August 2013

"The XKR-S GT is the most extreme iteration of the Jaguar R Brand's performance focus. Utilizing race-car derived technology, all-aluminum construction and an uncompromised approach to aerodynamic efficiency, the result is a car as capable on the track as it is exhilarating on the road."

(MAHWAH, N.J.) - March 26, 2013 – The XKR-S GT is the ultimate track-ready and street legal version of the XK Coupe. This vehicle was developed by the Jaguar ETO division, an in-house specialty vehicle group.

The XKR-S GT begins with the high-strength all-aluminum body structure featured on every Jaguar XK. This structure is assembled using aerospace derived aluminum bonding and riveting techniques. Astonishing performance is provided by a supercharged 5 -liter V8 engine, producing 550hp and 502 lb/ft or torque, driving through a six-speed automatic transmission and active electronically controlled rear differential. Combined with the aerodynamic and suspension changes, plus revisions to the traction control system's calibration, the result is a 0-60mph time of 3.9 seconds.2 Electronically limited top speed is 186mph.2

The addition of extensive aerodynamic enhancements, suspension changes, and carbon ceramic brakes, endow the XKR-S GT with track-ready performance. A limited production run will see just 30 cars built for North America, with 25 for the United States, and 5 for Canada.

A range of bespoke carbon fiber components all work to maximize the aerodynamic down force. These include an extended front splitter, dive-planes and an elevated rear wing.

The XKR-S GT will be offered exclusively in Polaris White with black racing stripes, and will feature a Jaguar R-S GT script on its louvered hood. The warm charcoal colored interior features red accents, and includes 16-way electrically adjustable performance seats finished in soft-grain leather and suede cloth with the Jaguar and R-S GT scripts integrated into the backrests. "Jet" black suede cloth is used for the headliner and steering wheel. Steering wheel mounted paddle shifters are now finished in aluminum and are fitted as standard.

"The development of the XKR-S GT demanded an uncompromised approach to enhance aerodynamic down force, with complementary suspension changes to maximize high-speed cornering ability. In combination with the use of a carbon ceramic braking system, the result is the most focused 'R' model Jaguar has ever built."

"The XKR-S GT has been designed purely by the laws of physics. It has been developed in the wind tunnel and on the racetrack with the sole aim of creating as much high-speed stability and down force as possible. Nothing has been styled for the sake of it. It's been an exercise in efficiency and the result is a car that's raw, focused and devastatingly quick."
Ian Callum, Director of Design, Jaguar

The XKR-S GT features a wrap-around carbon-fiber front air splitter which extends forward 2.4-inches (60mm). This splitter initializes the management of airflow around, over and underneath the car. Aggressive carbon-fiber twin dive-planes and wheel arch extensions improve the efficiency of airflow around the car. The addition of an aluminum front undertray serves to smooth airflow under the car and enhance engine and brake cooling.

A rear carbon-fiber diffuser ensures the smooth exit of air from underneath the car, while the elevated carbon-fiber rear wing works in combination with the decklid mounted spoiler to maximize rear down force. At its electronically limited top speed of 186mph2 the XKR-S GT produces 320lbs (145kg) of down force. A new hood with shaped louvers serve as an engine cooling aid, and help aerodynamic performance by improving the airflow through the front end of the car.

Integral to the revised suspension system is a new spring and damper module design. The XKR-S GT has a motorsport-derived twin spring setup mated to the Jaguar Adaptive Dynamics active damping system – the dampers are now also ride-height adjustable. Front and rear spring rates are 68% and 25% stiffer respectively than on the standard XKR-S, while the damper tune is much more track-focused, providing increased levels of body control and grip.

The Jaguar Adaptive Dynamics system has been tailored for the XKR-S GT so that the suspension parameters in the selectable "Dynamic Mode" delivers a higher level of body control with enhanced traction and grip.

The XKR-S GT has a front track which is two inches (52mm) wider than that of the XKR-S while the rear remains the same. The steering rack features a faster ratio and retuned steering valving. The result is an immediacy of turn-in and crisp response to steering inputs.

"The XKR-S GT is an uncompromised car, but one that inspires confidence and encourages the driver to push it to its limits, fully exploring its handling abilities. It's a car that draws you in and is never intimidating, with performance that is both accessible and rewarding."

The XKR-S GT is the first production Jaguar to be fitted with a carbon ceramic braking system. The internally ventilated and cross-drilled lightweight brake discs measure 15.7-inches (398mm) and 15.0-inches (380mm) front/rear respectively. Combined with six-piston monoblock front calipers, and four piston rear units –– the XKR-S GT delivers extraordinary stopping power and brake pedal feel. The lightweight nature of the carbon ceramic system means a reduction in unsprung weight of 46.3lbs (21kg). The XKR-S GT carbon ceramic braking system also has a longer life span than a standard system. The calipers are painted yellow, and are branded with a 'Jaguar Carbon Ceramic' script.

Enhanced braking feel comes courtesy of the electronic "Pre-Fill" system. Working in conjunction with the car's DSC system, Pre-Fill subtly pressurizes the brakes every time the driver comes off the throttle pedal, resulting in a very short and consistent level of travel on the brake pedal. This maximizes braking response, reduces the car's stopping distance and delivers increased levels of confidence during high performance driving.

"The disc and pad materials are specially tailored for Jaguar characteristics. Because the XKR-S GT is a road car as well as one suitable for customers to take on the track, we engineered it for race-car braking performance but with no compromise to cold or wet weather ability."

An all-aluminum 5-liter supercharged quad-cam V8 engine produces 550hp and 502 lb/ft of torque, and delivers exhilarating performance and efficiency thanks to the technologies such as spray-guided direct injection (SGDI) and dual independent variable cam timing (DIVCT). The high-pressure die-cast lightweight aluminum block is stiffened with cast-iron liners and cross-bolted main bearing caps, providing refinement to match its power. The engine breathes through aluminum four-valve cylinder heads, with pressurized air supplied by a Roots-type twin vortex supercharger. Two air to liquid intercoolers, which feature their own cooling circuit, reduce the temperature of the intake charge to optimize power and efficiency.