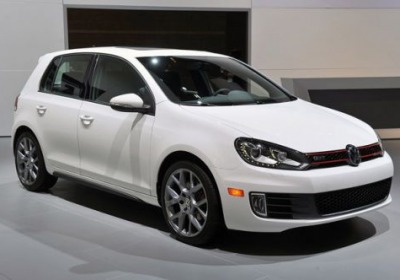 The Volkswagen booth at this year's Chicago Auto Show was filled with various special edition models of the Beetle and GTI. In addition to the GTI Wolfsburg Edition, the Volkswagen GTI Driver's Edition helps to wrap up the 2013 model year as VW readies the all-new MkVII Golf next year.

Only 3,000 of the GTI Driver's Edition models will be produced in four-door body style only, and the available color palette will be limited to just Candy White, Carbon Steel Gray and Deep Black. The package will come standard with the GTI's Sunroof and Navigation package, and it will add unique features such as the 18-inch "Laguna" wheels, a golf-ball shift knob, partial leather seats and red-stitching on the carpeted floor mats. Buyers of this package will also get a certificate of authenticity and some GTI swag such as a hat, keychain and parking sign.

Starting price for the 2013 Volkswagen GTI Driver's Edition is $29,695 with the six-speed manual and $30,795 if you choose the DSG – both prices exclude destination charges.

The press release for both limited-edition GTI models is posted after the jump.

Herndon, VA / Chicago, - Volkswagen announced today that it will offer two limited-edition models for the GTI for the 2013 model year. The GTI Wolfsburg Edition and GTI Driver's Edition will be offered in limited quantities for the final model year of the sixth-generation hot-hatch. The limited-edition models are available in four-door guise only and are offered in three colors-Candy White, Carbon Steel Gray, and Deep Black.