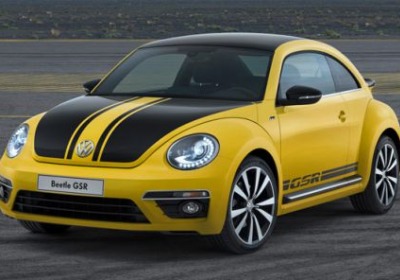 Volkswagen has chosen to really expand its performance-tuned portfolio at this year's Chicago Auto Show, bringing along a couple of new Beetles destined for model year 2014, as well as a pair of freshened GTI packages that you'll be able to buy almost right away.

The first, and splashiest of the Chicago goodies on the VW stand has got to be the 2014 Volkswagen Beetle GSR. Don't lose your temper, Acura Integra geeks; in this case, GSR stands for "Gelb Schwarzer Renner" or "Yellow Black Racer," and harkens back to a sport-tuned classic Beetle from the 1970s. For the 2014 iteration, the GSR gets a 210-horsepower version of VW's 2.0-liter turbo four-cylinder. That engine is enough to push the Beetle to 60 miles per hour in 6.6 seconds, and up to a top speed of 130 mph.

Of course, you'll have long-since noticed the shockingly yellow-and-black livery before you stumble across the Turbo badge on the rear deck. The GSR gets 19-inch alloy wheels, 235-section tires and a tea-tray rear spoiler, but it's the paint and graphics package that will decide if this is your (lemony) cup of tea. Things don't get any subtler inside the car, either, as VW has carried the colorway through to the interior, as well. Only 3,500 Beetle GSRs will be produced, with just more than half of those going to the US – call your dealer today, Wiz Khalifa.

Slightly less racy than the GSR is another Beetle for Chicago; this time a Volkswagen Beetle Convertible with the R-Line package. Almost identical to the standard Beetle Convertible Turbo from a functional standpoint, the 2014 R-Line car gets some unique 19-inch aluminum wheels with lower profile tires, LED DRLs to augment Bi-Xenon headlamps and trim-specific badging. You'll also find R-Line branding sprinkled through the cabin of the car, and a model which is fully kitted out with technology options.

Finally, VW is offering a couple of limited edition GTI models to close out the 2013 model year (yes, we know it's February). There'll be just 3,000 examples of the Volkswagen GTI Driver's Edition produced, all of them offering new 18-inch wheels, a golf ball shifter knob for the six-speed manual and the sunroof and navigation packages from the normal GTI spec sheet. A Wolfsburg Edition car will make a similar offering, but without the navi and sunroof. The Wolfsburg GTI will start from $25,095 in 6MT trim, while the rarer Driver's Edition will run $29,695 with the stick shift.

Check out press releases for all of these vehicles below, and stay tuned as we bring you all of the live action from the Chicago show floor.

- R-Line specification offers another level of sportiness to the all-new Beetle Convertible lineup
- Joins the CC, Tiguan, Touareg, and the Beetle coupe as the fifth car in the R- Line family

Herndon, VA/Chicago, February 7, 2013 - Volkswagen of America, Inc. announced today at the 2013 Chicago Auto Show that it will offer the R-Line trim on another model for the U.S. market. Joining the CC R-Line, Beetle R-Line coupe, and the recently introduced Tiguan R-Line and Touareg R-Line, the Beetle Convertible R-Line will be added to the Volkswagen line-up for model year 2014.

Herndon, VA / Chicago, February 7, 2013 - Volkswagen announced today that it will offer two limited-edition models for the GTI for the 2013 model year. The GTI Wolfsburg Edition and GTI
Driver's Edition will be offered in limited quantities for the final model year of the sixth-generation hot-hatch. The limited-edition models are available in four-door guise only and are offered in three colors-Candy White, Carbon Steel Gray, and Deep Black.