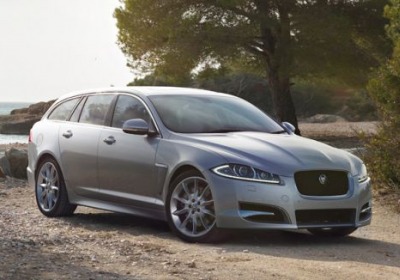 Editor's Note: Our reporter was anxious to get some time behind the wheel of the XF Sportbrake, even though Jaguar only had a very small window available for us to drive it. As a result, we weren't able to capture our usual original images to go with the Quick Spin story. Please accept our regrets, and Jag's lovely stock photography, instead.

The last wagon attempt from Jaguar was the X-Type, built between 2003 and that model line's unceremonious end in 2009. That X-Type and its legacy represent a real dog of a chapter for Jaguar, and for the Halewood factory where the barker was built. It was the final joke told prior to the brand's proper rebirth phase – a phase we're enjoying the heck out of today.

Current magnanimous Jaguar owner Tata can be thanked for this new wagon, the XF Sportbrake. Like all newness coming from Jag these days, this new wagon also feels lightyears more serious an offering, ready to compete squarely with established premium wagon makers across Europe. A Jaguar wagon in America is a far-off priority for the company, frankly. Still we deserve to know what we're missing for the time being from this (sometimes overly) cherished British firm.


I was given a right-hand-drive 3.0-liter turbodiesel XF Sportbrake. Jaguar currently offers only diesel powerplants in the wagon due to the European market buying nearly 100 percent of its wagon bodies with the far more efficient powerplants. And on the 40 miles from Welshpool over to Bala at the edge of Wales' Snowdonia National Park, there's some driving to be done.

Driving Notes
As of right now, the XF Sportbrake is exclusively for European sale, hence the current two-engine diesel range. For the North American market, the next big push after the F-Type convertible and coupe (the latter based on the ultra-sexy C-X16 concept car) is the crossover/SUV, reportedly due out in 2016.