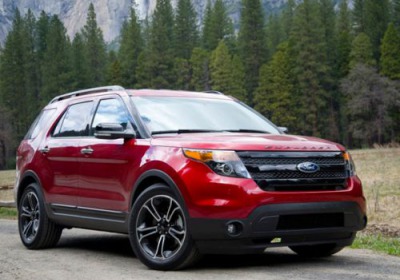 When one speaks of sporty and fun-to-drive utility vehicles, few would put the Ford Explorer in the same category as the Jeep Grand Cherokee SRT8, BMW X5 or Porsche Cayenne. Yet, with just a few reservations, I'd toss the new-for-2013 Ford Explorer Sport close to that arena for consideration.

As a recap, the sportiest of Explorers is fitted with Ford's twin-turbocharged 3.5-liter Ecoboost V6, making 365 horsepower and 350 pound feet of torque. Acceleration is brisk (figure about 7 seconds to 60 miles per hour), as power goes to all four wheels through a six-speed automatic transmission. Contributing to its more athletic demeanor are larger front brakes, a sport-tuned suspension, chassis upgrades, quicker steering ratio and a more aggressive wheel/tire package. Cosmetically, the Sport is distinguished by its blacked-out lights, black trim and noticeable lack of chrome (with the exception of the door handles).

Ford recently handed me the keys to a Ruby Red Metallic Explorer Sport. Rather than mindlessly drive the big seven-passenger all-wheel drive hauler in soccer mom circles around Los Angeles, I loaded up my family and embarked on a long weekend road trip to Yosemite National Park.