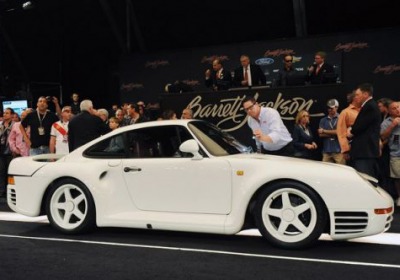 Fans of Porsche in America have longed for the chance to buy a 959 ever since the German automaker produced and sold it (well, sold it everywhere but the United States...) in the 1980s. Well, they just had their chance. The car you see above is a Porsche 959 prototype built in 1986, and only one other running prototype still exists.

The 959 prototype can't be driven on public roads, as it carries no such certification. Somehow, we doubt that matters all that much to the new buyer – this one is probably going to be sitting in a collection. When the gavel finally fell, bidding had reached $400,000, plus a 10-percent buyer's fee.

Check out our high-res image gallery above to see this prototype up close, and scroll down below to watch a video of it crossing the auction block and for its official auction description.

*UPDATE: Check out a video clip of the car's auction below.

Code V1KOM (EX: BB-PW481) testing car. One of two running prototypes and one of only four survivors. The Porsche 959 is one of the greatest sports cars ever to be assembled and touch the black asphalt which covers the roads on which the 959 is an undisputed champion. The 959 is one of if not the greatest Porsche ever assembled and is just as rare as its title as a world class sports car. In October of 1983, Porsche A.G. announced they will produce 200 Street Version 959s and will sell them to the lucky 200 new owners who are on the Porsche's VIP list. For three years Porsche engineers studied and worked on the 959s prototypes and designs. The street version of the 959 debuted at the 1985 Frankfurt Motor Show as a 1986 model, these were pre-production model carrying the Porsche 930 Turbo chassis numbers. In 1985, Helmut Bott, head of the 959 development, had taken 29 of 1986 model 930 Turbo chassis from the Porsche factory to turn them into the 959 pre-production prototypes and these were called Code F, N and V. These 29 prototypes were the latest prototypes and they were used for various final tests, media coverage, crush tests and road tests. This car is one of the 7 V-series prototypes and it was used as the chassis, ABS development car which was seen at the famous high speed testing facilities like Nardo, Italy and Minerva, France. Sadly most of the 29 prototype 959s were destroyed and scrapped by the Porsche factory after the 959 project had ended, this particular prototype became one of only four surviving and also one of only two running prototypes in existence still wearing its original pre-production Dunlops with its original prototype light weight wheels. All production 959s were delivered with Bridgestone RE71s with production type wheels. With Porsche factory no-longer releasing any prototype automobiles to the public, this is a very rare chance in owning a prototype Porsche. Not only is it a prototype Porsche, it doesn't get any better than owning the 959 prototype. **SOLD ON BILL OF SALE ONLY** **BUYER EXPRESSLY ACKNOWLEDGES AND AGREES THAT THIS VEHICLE IS A PROTOTYPE AND IS NOT CERTIFIED TO COMPLY WITH ANY FEDERAL, STATE OR LOCAL LAWS, RULES OR REGULATIONS OR FOR REGISTRATION FOR DRIVING ON PUBLIC ROADS.**