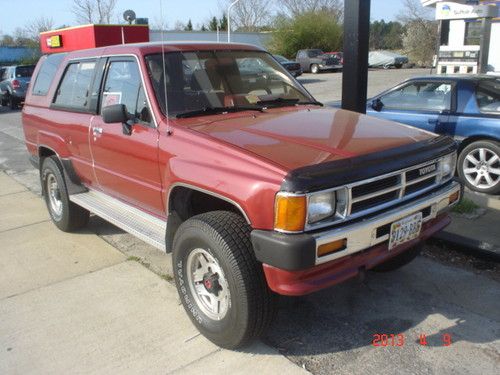 First time listing a vehicle on Ebay so I want to get it right.  I have a first generation Toyota 4 Runner for sale.  This is a California truck, has only been in Virginia since February of 2012.  Major renovation work completed prior to my purchasing.  New paint job using original color in the last 2 years.  There are some dings and scratches, I will post pictures.  The only rust I can find is some minor surface rust from the scratches.  All new upholstery including the seats and door panels.  The chasis has roughly 301,000 miles on it but the motor has had extensive work done.  In the last couple of months I had the top end professionally rebuilt including new camshaft and rollers.  The shop advised that everything looked great, the timing chain and all the pulleys had already been replaced and in good condition.  The truck burns no oil, no smoke with startup, runs great.  Automatic transmission works fine.  Note, the truck is 4wd but someone at some point removed the front drive shaft.  Since we have never had it off road we didn't even realize it, runs fine without it.  Our shop would charge $250 ($150 part, $100 labor) to put one back on but I recommend checking with your mechanic.  There is an aftermarket stereo in the truck that works great but it appears only the front speakers work.  There are some accessory cables/jacks for extra components.  AC blows cold, heat works fine. I just put new tires on it ($700). In the back the cover for the rear window wiper motor is missing but the wiper works fine as well as the rear window.  The only other thing that I am aware of that does not work is the backlight for the heat and air switch doesn't work, at night you can't see those switches.   Truck currently has Ranchero adjustable shocks and rides like a light weight truck.  I bought this for my wife to use to commute to work and she doesn't like it, so it is time to sell.  I do have it advertised locally so I reserve the right to end early.  Shipping is the responsibility of the buyer.  Your are welcome to have it checked out (at your cost), I can provide the name of a couple local shops including the one who has done all of the work. Realize I am not a mechanic and I have described this vehicle to the best of my ability, and keep in mind it is a SUV that is over 20 year sold.  No warranties expressed or implied.   Thanks for looking!!!