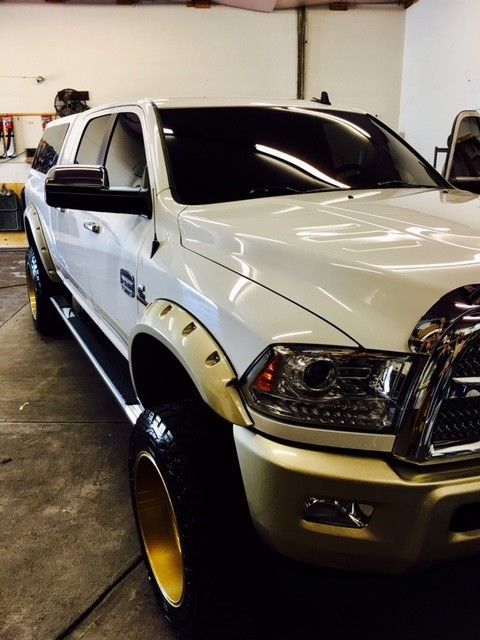 I have a 2015 Ram 2500 Longhorn MegaCab 4x4 Cummins Diesel loaded with a ProComp 6' lift. The truck is sitting on
Custom Fuel Triton 22x12 wheels with Toyo 37x12.50x22 RT tires. This truck has Carli front steering components with
Fox 2.0 shocks and Bushwacker custom painted flares. The truck was purchased stock and all customizing is NEW. The
topper is a top of the line Leer100XQ with power lock feature. The truck is running stealth HPP tuning with extreme
power and all DPF hardware in place. The truck no longer requires DEF fluid, the stealth tune took that away. I
have the truck tinted with high grade solar film. This is not your run of the mill tint job. The truck rides
excellent with no road walk or vibration. Don't be fooled by junk lift kits that ride like dump trucks. This truck
will not disappoint, I built this truck to be a RoadKing and that is what it is

Ram Truck's Gear Up! hunting series teaches you how to gut a deer

Ram knows that hunters and other outdoor enthusiasts make up a key demographic of its trucks' sales, so late last year it started an Internet hunting video series called Gear Up! on YouTube hosted by a variety of attractive ladies dressed in camouflage. (Ram knows its target audience, eh?).
This series has been going since October, but it caught our eye with a recent episode that gives instructions on how to properly gut (or dress) a deer. There are no graphic images, but Megan (this episode's host) does provide detailed and frank - if slightly surreal - deer-processing tips in a cheerful tone. For example: "Begin sliding your knife up the deer's belly towards its neck" and "sever the final tubes of the rectum." Oh, and this gem: "At this point, you'll need to get a little limber and actually stick your hand and knife up through the hole that is now visible leading into the deer's throat..."
Keep in mind, this is one of the advanced videos, so if you're really trying to learn how to hunt deer, you should start from the earlier, beginner-level videos in this Hunting 101 series. Scroll down if you'd like to learn how to clean a deer carcass Ram-style, and we've even included a few of the other how-to videos (including how to choose a taxidermist!) in this somewhat bizarre lifestyle marketing series.