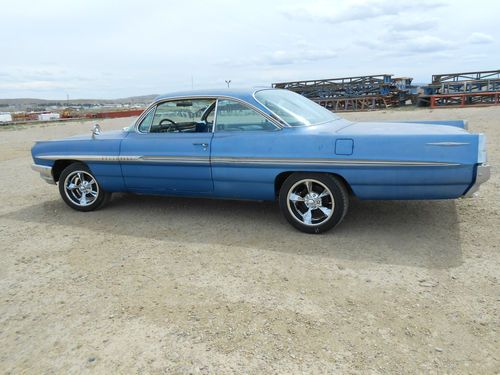 Your bidding on a very rare sport coupe 61 bonneville.  This car needs a complete restoration and I am not implying any type of warranty.  So what I have is a 2 owner car that is very fixable.  The car does have some rust but is a very good start.  The car had a bad paint job in 1980 and now the car is showing it.  All of the 61's have the same rust issues such as rockers, trunk floor, pillar and such.  As you will see not real bad but will need attention.  The car sports, remote mirror, power bench, power windows, AC, day and night mirror, and such. The car has been up dated with a 69 firebird HO 400 motor that has only about 500 miles on it and turbo 400 trans.  The wheels are 17 in with new eagle tires.  The car does run and drive but has been off the road for 25 years so I would not trust it to just to take off with it.  I will try to answer all of your questions the best I can.  I have not owned the car for a long time and have not had it on the road.  This car could be great to drive and restore at the same time.  If you would like the original wheels and spinner hub caps I will discount the car 500.00 and put the originals back on and keep the 17's.

I was going to make it a drag car but the car is to nice to cut up.  The floors are super solid, fenders and such.