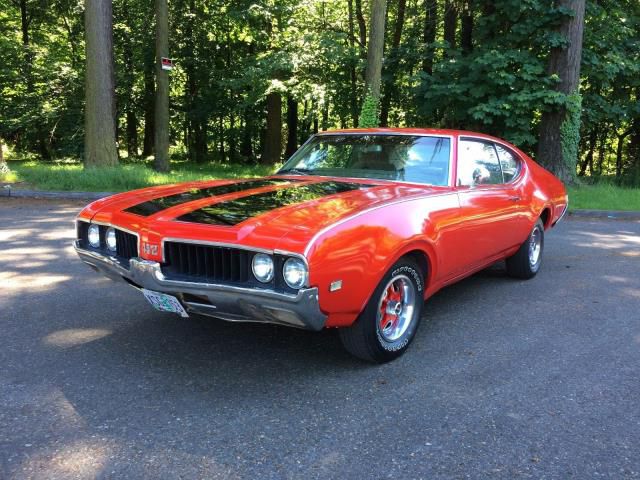 1969 Oldsmobile 442. This Is A Real 442 With The 344 Vin Code. 350 Engine AndTh400 Transmission. Both Have Been Rebuilt And Have A Little Bit Under 10,000Miles On Them. 350 Engine Has About 280 Horsepower And Is Very Smooth. TheTransmission Has A Shift Kit And Absolutely Glides Into The Next Gear. Runs,Drives, Stops, And Looks Great! True Dual Exhaust That Sounds Great. PowerSteering And Power Disk Brakes. Nice Red Paint With Dual Black Racing Stripes.The Paint Is Less Than A Year Old. If You Would Like Black Stripes On The BackThey Can Be Added By The Same Gentlemen Who Did The Paint Job At No Extra Cost.Body Is Straight With No Dings Or Dents. No Rust Issues Of Any Kind. Floors,Quarters, Trunk, Etc Are All Solid And Rust Free. Needs A Few Odds And Ends ToMake It Really Nice. This Car Is Not Show Quality But It Is A Nice Cruiser. ThisClassic Is Daily Driver Ready. Extremely Comfortable And Smooth. Lights Work,Signals Work, Gas Gauge Works. The Speedometer Does Not Work. The Front BumperHas Various Dings In It. Some Of The Trim On The Car Is Dinged Up. The Back SeatIs Torn And Would Benefit From Being Recovered. Front Seats Are Not Original ButLook Good. I Have Lots Of Extra Trim In The Trunk For The Car. This Is A TrueClassic Muscle Car And They Are Becoming More Rare By The Day. Going Up In ValueFast.
CONTACT ME AT : DeliaBertolinifpjz@yahoo.com