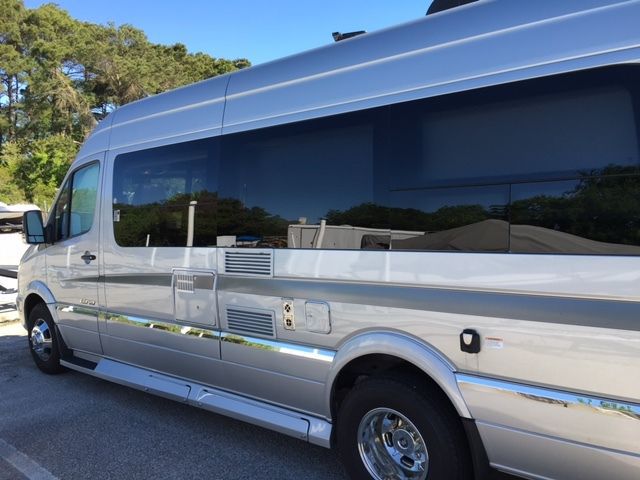 For more details email me at: mohamedmrrollag@ukjo.com .

2015 Mercedes-Benz Sprinter Winnebago Era 170X in Brilliant Silver with (top of the line) interior package. My
coach (see is a CLASS -B) is in MINT condition with only 10,000 miles. I purchased this coach new a year ago as a
bucket list item. In my retirement I wanted to travel to all the major golf tournaments both to play and to watch
the pro’s, I can report that I have check this off my list. Now it is time to sell the original MSRP was over
$114,000 and she was worth every penny. This is a very luxurious coach, best described as more like a LEAR Jet
inside than a RV. My coach has every option that I could get at the time: (see list below). All the service has
been performed by my local Mercedes-Benz dealer in Charleston SC (Baker Mercedes-Benz). There is a transferable
factory warranty that comes with the coach. She has a 26 gal fuel tank, 28 gal freshwater tank, 2 holding tanks 31
gal and a LPG 16 gal tank. She is 24 feet in length and 6.5 feet wide and 9.7 feet tall. It is a good size and
roomy inside but not too big to handle. In addition, I have a rear luggage adaptor to so that you can maximize
your interior space which connects to the 5,000 hitch (see pictures). She has all the comforts of a CLASS A coach
with a Refrigerator, Floor Heater, Upper AC/Heater, TV’s, Rear Bench Sofa Seat and Jensen Entertainment – Blue
Tooth system as well as a cooktop and microwave.
VIN: WDAPF4CC1F5949128
Options:
FE8: Gray/High Gloss Marble Cherry Interior Package
15D: Infotainment center and GPS
22W: Second Battery
27G: Brilliant Silver
35T: Valance Panel Stainless Steel Trim Package
63W: Chrome Wheels