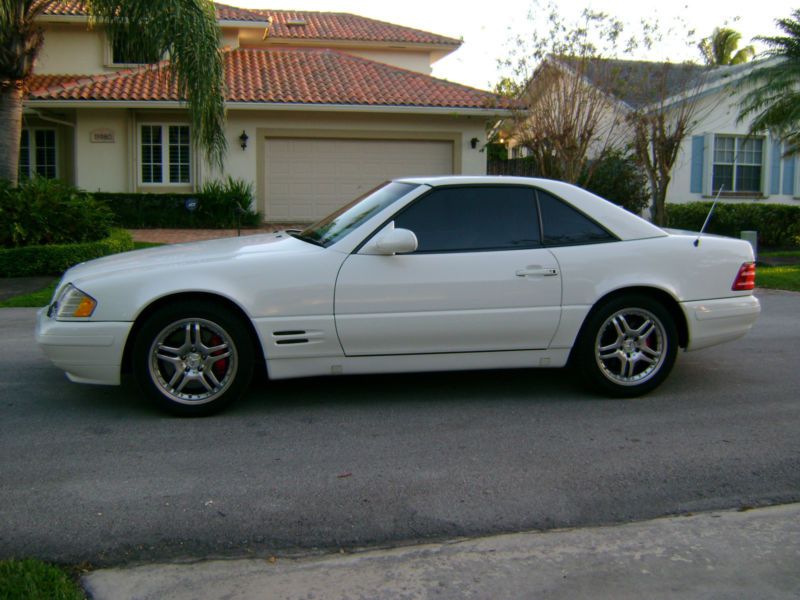 If you have any questions please email at: bookerbkklaas@ukso.com .

Always been garage kept / covered and used in good weather. Kept at my rental property. It has been meticulously
serviced and all operations are on point. All convertible hydraulics have been replaced. ( have old parts )
Did not take hard top off because it really requires 2 people; however, the beige top and back window are in
perfect condition.
*** I HAVE THE ORIGINAL WHEELS THAT WILL GO WITH THE SALE. THE RIMS CURRENTLY ON WILL BE TAKEN OFF.
1999 Mercedes SL 500 - built in 4/99 - Snow White / Beige leather w/ 28000 miles. An original, 2 owner car with
NO ACCIDENTS / NO PAINT WORK / NEVER SMOKED IN. Well appointed with SL2 pkg. - Xenon headlamps, Heated seats and MB
CD changer to the tune of $84500.00 new. Have all books, window sticker & dealer manuals.
The original paint has an amazing depth and shine. All of the exterior trim, moldings, handles, window glass,
emblems, roof panel, rubber seals and all else are in perfect condition. The orig. rims are clean and the tires
have 75% tread. Never mistreated or driven hard. The exterior is a solid 9.8+ / 10.
On the inside, the Beige interior still looks, feels and smells like new. As you can see in the close up pics,
there is no wear. The door panels, dash, center console, buttons and faceplates are unmarked. All of the switches (
power windows, door locks, cruise, antenna, and 6 way power seats w/ lumbar work without issue ). The stereo system
sounds great. The undercarriage is dry / rust free - never driven in inclement weather. Inside, it is a 9.9 / 10.
Mechanically, it starts, idles, and drives smoothly as a fine tuned machine should. The V8 engine performs
efficiently on all levels. Has had all of the pertinent and preventative maintenance done. It shifts, smooth and
handles like a well oiled machine should. The a/c is cold and the brakes have plenty of pad left. There is nothing
that needs to be done for quite some time. Just keep 93 gas, do the synthetic oil, and this baby will run for 250k
miles.