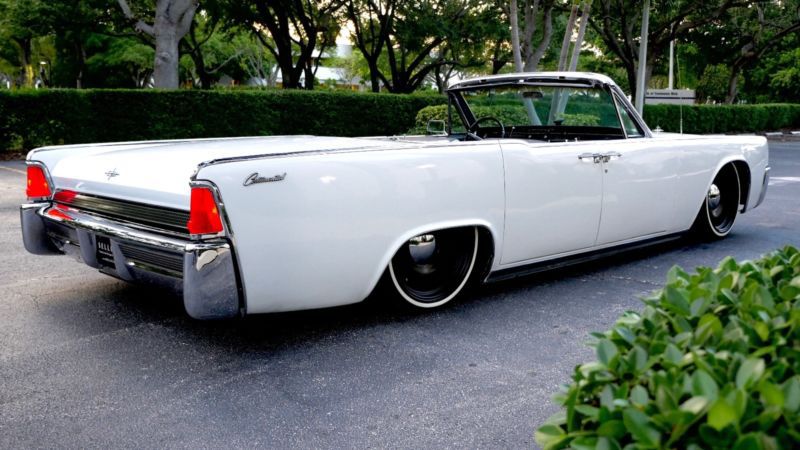 Just email me at: allisonasshulick@highsociety.org .

Professionally Restored 1964 Lincoln Continental Convertible by SELLUXE. This is an exact twin car to the recent
1964 we sold 2 months ago. The car has a brand new 2016 AccuAir Air Management
System along with Mobsteel’s complete front and rear air ride kit.
This is the current best of the best and most expensive air ride management system on
the market. Over $70K invested not including the cost of the original car which was a
great car to start from and was 95% rust free. The whole car is super solid
throughout and the undercarriage is perfect which is rare. Brand New Black
Mobsteel Detroit Steel 20 Inch wheels with ¾ inch white wall tires that have
less then 50 miles on them. The car went through a 2 year restoration.
This 1964 Lincoln ContinentalConvertible, like our most recent one we sold,
we believe are a couple of the nicest ones in existence. Less then 75 miles has been
logged since the restore completion. Sourcing high quality Lincoln parts and
overhauling / rebuilding the main mechanical components of the 1960’s Lincoln’s is a
serious challenge and very time consuming due to no factory reproduction parts being
available to be purchased (other then the windshield, factory spec rubber seal kits and a
few misc parts). $9K was spent alone was spent just on overhauling the convertible top
relays, motors, hydraulics, hoses, New Upper Panel Limited Switch (super important in
orderto have a reliable convertible top) and rebuilding all windows motor and new
switches. This 64 actually has the working two rear window automatic drops
for when the rear doors open and close (rarely work on most Lincoln's)
The under carriage is super clean and also show cases that this car has no
rust. The many vendors who worked on this car were in different
areas of Florida. The car was either taken to them or they came to work on
the car in South Florida during the restoration. The car is solid and it’s an
incredible looking clean classic 64 Lincoln Continental Convertible that gets
tons of attention from all ages wherever it goes. Car sounds great, runs and
shifts super smooth and the brakes are strong.
Restoration details and what is NEW or rebuilt
on the car
Engine
-Engine was serviced and tuned (oil change and all fluids changed)
-New spark plugs and wires
-New air filter
-New battery
-2 new engine motor mounts
-Cleaned and painted entire engine compartment
-New under hood engine rubber bumpers (4)
-Brand new Exhaust from the headers to mufflers
Transmission
-Inspected and serviced (works as it should and shifts smooth)
Brakes
-Brakes were inspected and serviced. Brakes are super strong
Electrical
-All window switches were replaced and or serviced
-All window motors were serviced, rebuilt and/or replaced if needed. They go
up and down perfectly
-Window tracks were oiled and serviced
-Convertible top switch, relays, hoses and hydraulics were serviced.
Top works perfect every time. Lots of time, servicing and replacement parts
went in to this in order to get the convertible top to work properly day in and
day out. New upper panel limit switch which is the brain of the convertible top
-All headlight bulbs, turning signals, reverse lights and break light
bulbs were replaced and tested
-Dash lights replaced
-Gauges tested and all work
Exterior
-New black convertible top (professionally installed)
-New White paint job. The entire car was stripped and brought
down to raw metal (have restoration pictures if your interested in
seeing, shoot me a message)
-Front and rear chrome bumper endings and the main front and
rear bumpers have been re-chromed to show quality
-New chrome front hood and rear trunk lid chromed Lincoln
emblems
-Stainless bottom rock guards are polished and in great condition
-All peak molding trim is in great shape. Professionally polished to
mirror shine
-2 New rear quarter panel "Continental Script" emblems
-Brand New Chrome driver side mirror
-Deck lid originally was in really good shape. The body work was
done correctly and the deck lid looks great on the interior and
exterior which is rare due to deck lids usually being in much rougher
shape before the restoration process
-New rear brake light lenses
-Headlight housing surrounding the front headlights was Re
Chromed
-Front Grill is in really good condition (most 64's are pitted bad)
Interior
-New black trunk carpet (top quality from specialty Lincoln vendor)
-New black interior with built in original Lincoln drivers side rubber
flooring piece under the floor mat (top quality from specialty Lincoln
vendor)
-New black Lincoln embroidered logo floor mats for front
-New high end quality and thick black leather (has been properly
conditioned over a 1 week period by a well known leather specialist
who did the seats locally) New white leather was also used in the
middle strip and sides of the seats and the door panels
-New rear view mirror and hardware
-All original black dash in perfect condition (Rare) No cracks
-New rubber seals throughout the entire car. Doors, trunk lid,
windows, convertible top seal, and many other smaller rubber seals
replaced with aftermarket high quality seals
Clear Certificate of Title in hand