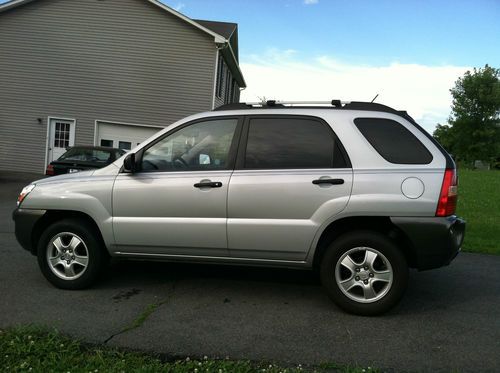 Wonder Woman Kia Sportage is anything but invisible

The spectacular partnering of Kia and DC Entertainment (the company we grew up loving as DC Comics) continues here at the New York Auto Show, with this Wonder Woman-inspired 2013 Kia Sportage. Ardent Autoblog readers will undoubtedly remember the fruits of earlier Kia/DC efforts: Batman Optima, Flash Forte Koup, Green Lantern Soul, Cyborg Forte, Aquaman Rio and Superman Optima Hybrid. (We're still trying to figure out who Cyborg is, too.)
The Wonder Woman Sportage, sporting the Amazing Amazon's particularly patriotic livery, is perhaps the most, eh, eye-catching super-Kia to date. (Actually, no, none of the superhero rides seared our eyeballs like Supe's hybrid.) Red, white and blue paint with spangled sides, an aggressively low body kit and a WW logo grille really sell the theme. Of course, The Lasso of Truth is represented too, showing up in the design as a subtle gold line that wraps around the bodywork.
As with the earlier DC concept cars, the Wonder Woman Sportage's real goal - aside from entertaining the kid-contingent of auto show goers - is to raise awareness for the We Can Be Heroes charity. The DC charitable program seeks to raise money and awareness about the hunger crisis in Ethiopia, Kenya and Somalia. Get a better look at Wonder Woman's crossover in our attached galleries and find the Kia press release below.