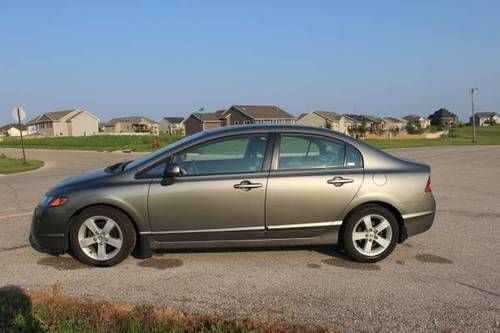 Condition: Used: A vehicle is considered used if it has been registered and issued a title. Used vehicles have had at least one previous owner. The condition of the exterior, interior and engine can vary depending on the vehicle's history. See the seller's listing for full details and description of any imperfections. ...
Loaded with Navigation System, Alloy Wheels, and Moon Roof. Very well maintained and kept in garage.
Drives great, looks great, everything works. Gets over 36 MPG on highway!
Will not ship or trade, no dealers please.
Will not ship, local pick up only. No warranty provided.
Read the Payment section, no exceptions to the payment policies.
118,685 miles
Color: Grey
More about the vehicle:
2007 Honda Civic EX Sedan, 4 doors
4-Cyl, VTEC, 1.8 Liter
Automatic Transmission
ABS (4-Wheel)
Power Windows
Power Door Locks
Cruise Control
Power Steering
Tilt Wheel
AM/FM Stereo
MP3 (Single Disc)
Navigation System
Dual Air Bags
Side Air Bags
Moon Roof
Alloy Wheels