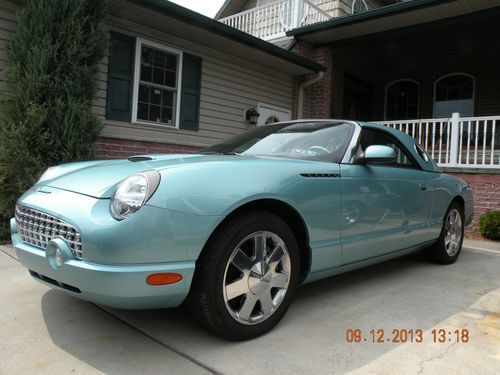 Condition: UsedA vehicle is considered used if it has been registered and issued a title. Used vehicles have had at least one previous owner. The condition of the exterior, interior and engine can vary depending on the vehicle's history. See the seller's listing for full details and description of any imperfections.Seller Notes:"This car is in incredible condition with only 2,500 miles on it. Garage kept and very very clean. Has all the options!"

Location: Altoona, PA
A very clean, as new Ford Thunderbird convertible in the very desirable Turquoise Thunderbird Blue color with 2 tone leather interior. Made in limited quantity, only one year, 2002. As fine an example of a garage kept T-Bird as you could probably hope to get. She has all the options and is a fun ride so grab your chance to own this fine convertible and enjoy some fun in the sun!