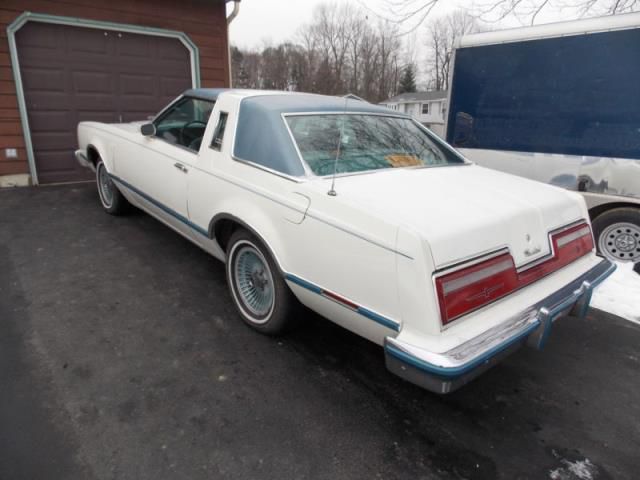 1978 FORD THUNDERBIRD DIAMOND JUBILEE. GREAT LOOKING AND RUNNING SERVIVOR OF THE 70'S. NICE WHITE COLOR WITH THE COMPLEMENTARY BLUE INTERIOR. NO CRACKS ON THE DASHBOARD THAT IS USUALLY COMMON. ALL GAUGES WORK PROPERLY EXCEPT THE CLOCK. THE INTERIOR AND HEADLINER ARE IN EXCELLENT CONDITION EXCEPT THE TOP REAR LEFT SIDE SEAT. IT WOULDN'T TAKE MUCH TO MAKE IT RIGHT. HEADLIGHTS WORK PROPERLY AS WELL AS THE HEADLIGHT COVERS. THE ENGINE RUNS STRONG AND TRANSMISSION SHIFTS PROPERLY. THIS IS IN GREAT CONDITION FOR THE YEAR. THE FRONT AND REAR BUMPERS DO HAVE SOME SURFACE RUST AS SEEN IN THE PICTURES. THE CAR HAS NO BODY RUST AND IS VERY CLEAN. POWER DOOR LOCKS DO NOT WORK BUT I ASSUME IT WOULDN'T BE A HARD FIX. I TRIED TO DISCRIBE THE CAR AS BEST AS I COULD AND HOPE THE PHOTOS WILL ANSWER ANY QUESTIONS THAT YOU MIGHT HAVE. 351 V8 MOTOR WITH AUTOMATIC TRASMISSION.