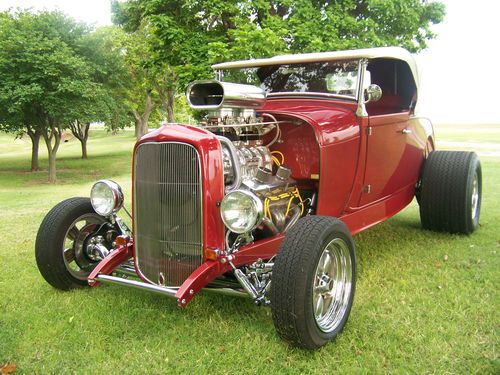 Condition: UsedA vehicle is considered used if it has been registered and issued a title. Used vehicles have had at least one previous owner. The condition of the exterior, interior and engine can vary depending on the vehicle's history. See the seller's listing for full details and description of any imperfections.Seller Notes:"1929 ROADSTER"

THIS ALL FIBERGLASS ROADSTER WAS A 5 YEAR PLUS BUILD WITH THE BEST OF THE BEST. COMPLETED IN 2009 AND ONLY DRIVEN 400 MILES SINCE COMPLETION. SOME OF THE ENGINE FEATURES ARE 671 WEIAND SUPER CHARGER "BLOWER", SPORTSMAN 2 HEADS, AND OVER $45000.00 IN PARTS ALONE. APPROX 750 PLUS HORSEPOWER WITH TURBO 350 TRANSMISSION, WAY TOO MUCH TO LIST ALTHOUGH RECEIPTS INCLUDED. APPRAISED AT OVER $70,000 AND IS NOT FOR THE FAINT OF HEART AND IS VERY VERY STRONG AND DEPENDABLE. THE CAR WAS PURCHASED FROM A GENTLEMAN WITH ILLNESS AND COULD NO LONGER CARE FOR HIS COLLECTION. I WELCOME ANY INSPECTION YOU WISH. THIS IS A TRUE PRO BUILD, AND WILL NOT BE OFFERED ON EBAY AGAIN. IF YOU HAVE ANY QUESTIONS I WILL ATTEMPT TO ANSWER TO THE BEST OF MY ABILITY. BID WITH COMPLETE CONFIDENCE PER MY SATISFACTION RATING.

PS. I WILL BE AVAILABLE FOR SHIPPING UNTIL AUGUST 28TH AND AFTER SEPTEMBER 1ST. 2013 THANK YOU AND GOOD LUCK IN YOUR BIDDING.