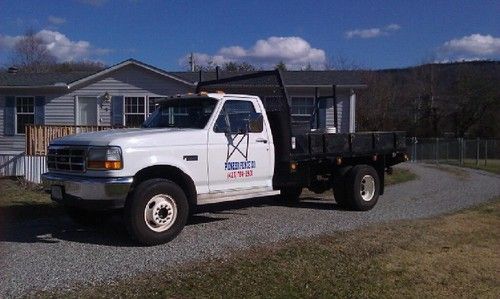 POWER WINDOWS WORK,COLD AIR CONDITION WORKS,NEW PIONEER AM/FM CD PLAYER,
TILT STEERING,DELAY WIPERS,HAS CRUISE BUT DON'T WORK
WINDSHIELD HAS NO CRACKS CHIPS OR LEAKS,UNDERNEATH STEEL TOOL BOX THAT CAN BE LOCKED
HAS A 5TH WHEEL DEPARTMENT BUT DON'T HAVE THE BALL HOOKUP,DUAL FUEL TANKS BOTH WORK
HAS TRAILER LIGHTS HOOKED UP READY TO USE
SEATS NOT TORN,DASH NOT CRACKED,ALUMINUM FLAT BED,
PRESSURE TREATED 2x12" SIDE BOARDS

NO WARRANTY (AS IS)

THIS WOULD MAKE A GREAT TRUCK FOR SOMEONE NEEDING A GOOD DEPENDABLE WORK TRUCK.

I WOULD TRUST IT TO GO ANYWHERE.

DRIVEN DAILY, IT'S NOT BEEN SITTING

GENERATOR AND ACCESSORIES NOT INCLUDED (TRUCK ONLY)

BUYER RESPONSIBLE FOR PICKING UP TRUCK

PAYMENT MUST BE PAID IN FULL 3 DAYS AFTER LISTING ENDS

500.00 DEPOSIT MUST BE MADE 24 HOURS AFTER AUCTION ENDS THROUGH PAYPAL