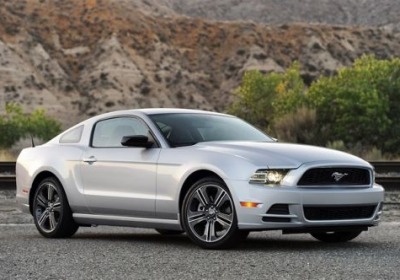 There was a time not so long ago when opting for a base Ford Mustang meant getting little more than some sheetmetal, an anemic four-cylinder engine and what may very well have been the world's most disappointing automatic transmission. During the Fox Body years, Ford seemed hell-bent on living up to Carroll Shelby's derogatory description of the coupe as little more than a runabout for demure office assistants, and the result was a base model with fewer sporting intentions than a Dilbert day calendar.

Some 20 years later, hopping behind the wheel of an entry-level pony is an entirely different experience. With all of the menacing aesthetics of the brawnier GT, a well-equipped interior and a drivetrain that toes the line between efficiency and power better than few before it, the 2013 Ford Mustang V6 is an attractive option for buyers in the big coupe market. But is it attractive enough to forgo the beastly GT?

Note: The Mustang shown in these photographs differs from the model we reviewed. The review model was a 2013 V6 Coupe Premium, while the pictured model is a 2013 V6 Coupe with the optional Performance Package. We regret the discrepancy, but circumstances left us with only this model to shoot.


The look falters a bit at the tail where the lines seem to lose their pointed sense of purpose.

Ford pulled the wraps off the most recent version of its Mustang last year, and the tweaks are wearing well. Up front, the two-door features a scowling fascia dominated by a vertical grille and contoured hood line. LED daytime running lights give the car a touch of premium, as do the optional 18-inch wheels of our tester (the Performance Package adds 19-inch wheels as seen in these photos). At 188.5 inches long, the Mustang is a big car, and its hefty proportions mean even those stocky rollers look smallish on this machine thanks to sizable fender gaps. We could do with about half an inch less ride height.

While we're generally fans of the Mustang's design, the look falters a bit at the tail for us, where the lines seem to lose their pointed sense of purpose presented by that long, expressive nose. To our eyes, the Mustang suffers from an unnaturally tall trunk deck, and the result is something of a cliff face out back. Fortunately, designers have broken up the slab with a gloss-black panel tucked between the two taillamps. The lights feature all sorts of LED wizardry, including hidden reverse lamps and clever sequential turn indicators. Sure, engineers lifted the trick from Ford Thunderbird and Mercury Cougar models of old, but seeing the lamps in action never fails to grab a reaction from onlookers in traffic. If everyone's indicators were this cool, drivers might be more inclined to use them.


Three years later the cabin has aged better than either of its two main competitors.

Jump indoors and the Mustang starts to distance itself somewhat from competitors like the Chevrolet Camaro V6 and Dodge Challenger V6. Ford quietly and significantly updated the coupe's interior back in 2010, and three years later, the cabin has aged better than its two main competitors. Our tester served up a nice, leather-wrapped steering wheel and comfortable, well-bolstered buckets. By some fortunate miracle, the Mustang has evaded the plague of MyFord Touch, which means buyers still get the pleasure of plinking on honest buttons and dials instead of furiously mashing a touchscreen to control entertainment and climate control options.

The driver also gets to enjoy a set of analog gauges with customizable color schemes ranging from a pink formerly only found in the worst of bridesmaid dresses to the more palatable green glow of '60s Ford gauges. We probably don't need to tell you which hue we favored. We've always been suckers for polyester blends, after all. Perhaps more importantly, the cluster includes a small TFT display for conveying all sorts of pertinent information. Using a small steering-wheel-mounted five-way switch, the driver can call up everything from intake manifold temperature to current tire pressure and fuel economy readouts, and the Track Apps function can time sprints to 60 miles per hour, runs down a quarter mile and other "track only" activities. There's even a little animated Christmas tree just like at a legitimate drag strip.


The Mustang's 3.7-liter V6 feels like it belongs in a pseudo muscle car.

The Mustang feels fairly premium indoors, though it pays to keep in mind the V6 Premium model carries a base MSRP of $26,200 (the basic V6 Coupe starts at $22,200). At that figure, we can excuse the expanses of plastic found on the door panels and elsewhere. We have a harder time giving the driving position a pass. The Mustang continues to suffer from the model's trademark tall cowl, which contributes to the impression you're sitting up to your eyeballs in a bathtub rather than tucked into a comfortable driving nest. Like so many bruisers in this segment, the Mustang delivers an interior that feels like wearing a suit jacket that's one size too big. While the effect isn't as dramatic as what's found in the Camaro or Challenger, Ford would do well to take some bloat out of this machine.


But it's underhood where the Mustang V6 shines. Unlike the 3.6-liter V6 engines found in the Camaro and Challenger, the Mustang's 3.7-liter V6 feels like it belongs in a pseudo muscle car. With 305 horsepower and 280 pound-feet of torque, this six has no trouble hustling the 3,500-pound coupe around. Ford even managed to give the powerplant a decent set of pipes, resulting in a car that sounds more track happy than commuter calm. Full horsepower arrives at a lofty 6,500 rpm, but acceleration is nice and linear without any of the dead bottom end found in the General Motors V6. Likewise, the Mustang's comparatively light curb weight means the drivetrain doesn't feel as taxed as the six-cylinder option in the Challenger. The particular V6 test machine weighed in at 3,523 pounds.


The transmission's manual mode isn't anything worth writing home about.

Our tester came saddled with a six-speed automatic transmission, and while the gearbox offers well-matched shifts for both cruising and cursing, the manual mode isn't anything worth writing home about. While white-bread offerings like the Chevrolet Malibu offer buyers the option of paddle shifters these days, the Mustang is left to trundle along with an entirely awkward rocker switch on the console-mounted shift lever. Dear Ford: Quit this amateur-hour business with a quickness. It's embarrassing.

Of course, the automatic does have its advantages. By leaving the gearbox unharried by human intervention and keeping from burying the throttle, the 3.7-liter V6 can return some surprising fuel economy. The Environmental Protection Agency claims the coupe is good for up to 19 miles per gallon city and 31 highway, though with our yokel selves behind the wheel, we managed to routinely see between 17 and 18 mpg in combined, spirited operation. Those figures inched up to around 20 mpg with a few highway runs thrown in.

On the road, the coupe's size means it takes some time to work up the confidence necessary to froth the machine into a lather, but once you overcome the tucked driving position and somewhat soft springs and dampers, the Mustang serves up a surprising amount of grip for a base model. With decent turn in and a modicum of feedback through the electric power steering system, the Mustang V6 will hustle right along with the best of them. That's partly due to some electro-wizardry that allows the driver to custom tailor the amount of assist the EPAS system serves up, and while commenters the world over will continue to deride that solid axle out back, the setup feels about as stable as the independent rear under the Camaro. We doubt most drivers will be able to tell the difference on the street when required to deal with the torque of a V6 engine.


If we were laying down our own cash, we'd skip all that and spend the same coin on the V6 Performance Package.

Ford isn't exactly known for confidence-inspiring brakes on anything without an SVT badge on the fender, and the Mustang V6 is no different. Initial bite is disappointing, and the soft pedal feel means it takes some digging to bring the machine down from speed. The hardware is up to the task, but it's clear the feedback is dialed in more for leisurely boulevard cruises than back-holler sprints. Color us disappointed.

Our tester came equipped with just under $2,900 in options, including the lustily named Equipment Group 202A, which includes a fancy rear decklid spoiler (not included on the base model we shot with the Performance Package), embroidered floor mats and 18-inch wheels. The remainder of the balance is soaked up by goodies like the six-speed automatic at $1,195 and a rain-sensing and security package with a few unnecessary electronic goodies. If we were laying down our own cash, we'd skip all of that and spend the same coin on the V6 Performance Package, complete with a strut tower brace, larger sway bars front and rear, stiffer springs, performance compound brake pads and a 3.31 limited slip rear axle. But that's just us.

If worries like fuel economy, insurance premiums or marital bliss demand opting for a base model, you could do worse than the Mustang V6. The car still looks damn impressive sulking in a parking lot, and it serves up a better driving experience than either of its two main competitors. But if you love driving, we don't need to tell you that practicality has no place in the equation that adds up to a set of Mustang keys in your pocket. Cars like this are all about those dark coils of want that stir just under your navel when you drop your guard.

As good as it is, we'd still never opt for the base V6 over the GT model's sinister dual-overhead cam 5.0-liter V8. The Mustang GT continues to represent one of the best performance bargains on the market today, and opting for the six pot with any plans for hitting a track or abusing your favorite stretch of road is simply a missed opportunity. That toned V8 can cure a bunch of ails, and bolting on the optional Brembo package whips the Mustang into fighting shape with better brakes and a more sorted suspension. At the end of the day, it's the car we want, and that makes the difference.