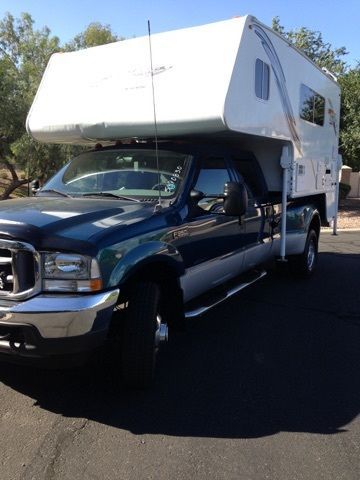 If you have questions email email me at: annettaaggarzone@wackyracers.net .

2002 FORD F-350 SUPER DUTY XLT CREW CAB 4 DOOR 7.3 LARIAT ONLY 35,000 MILES!
***IF YOU ARE ONLY INTERESTED IN THE TRUCK WITHOUT THE CAMPER I HAVE A LISTING FOR JUST THE TRUCK***
rear duel wheels
duel power seats
leather interior
alloy wheels
Chrome bars
Arizona vehicle
comes with a 2007 Montana 8 and a half foot camper
fully self contained
has a generator
microwave
jacks
roof A/C
non smoking truck and camper
will consider selling just the truck or just the trailer
Grandpa no longer has driving privileges, that is the only reason he's selling it. this is his baby. very well
maintained. runs excellent! must see to appreciate.