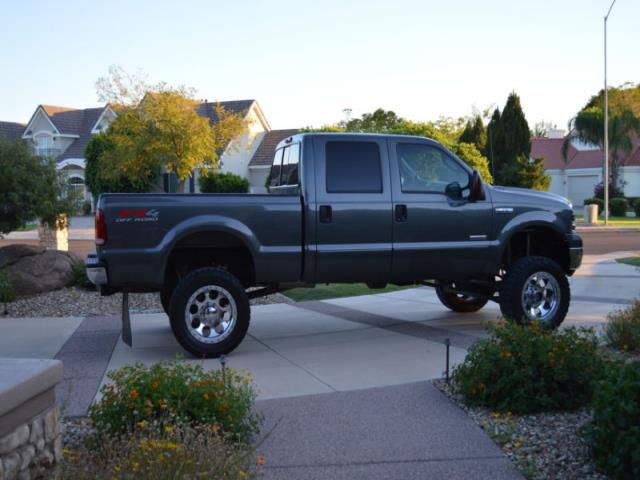 6.0L diesel powerstroke that is all stock except for an aftermarket muffler 6" Fabtech lift Replaced radius arms (part of the lift) for a much sleeker look Fabtech reservoir shocks (2 per tire on all 4 corners) Spring lift in the rear - not blocks power auto retracting running boards Automatic remote control metal tonneau cover that opens and closes with the click of a button. spray in bedliner 20" Mickey Thompson bead lock looking wheels and 35" tires about 50+% left Heavy duty mud flaps that are removeable if you have the need Power moonroof dual power heated bucket seats w center console power adjustable pedals power sliding rear window integrated brake controller 6 disc CD changer Driver info center w display for mileage and other neat things digital AC tinted windows extendable towing mirrors Bully Dog tuner I just took a trip back and forth to Los Angeles on 3/20 and the truck did everything you would expect. No engine lights, no noises, no issues - just a darn near new truck. The only couple of things that are "wrong" with the truck are a small ding in the tailgate (size of a nickel - shown in a picture) and some rock chips near the bottom (see picture) of the truck where the tires have thrown a rock or so. Other than that, this is literally as nice as you could ever expect. No disappointments at all. Price - I looked at kbb and bone stock this truck looks to be worth 27-28 depending on if you put in very good condition or excellent private party. I have to think I can get some of the extras back, but certainly know I cant get it all back. Add it up - lift with shocks $4++, tires and wheels $3, running boards $1500, electric tonneau $1. Come have a look and I know that if you want a super clean low mileage diesel