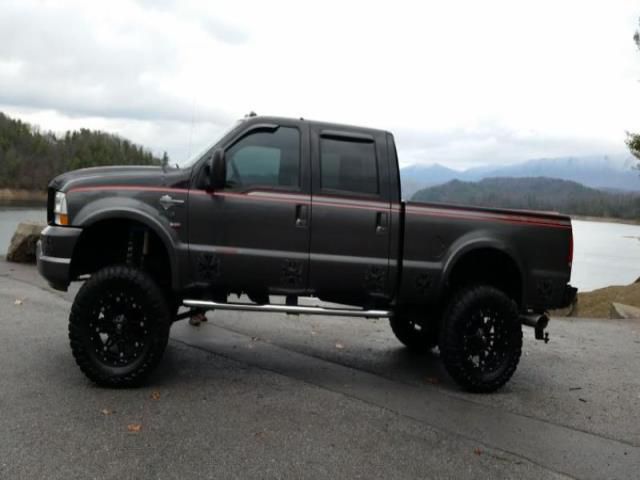 selling my 2004 ford f-250 harley davidson truck I am the 2nd owner and only selling to get a newer truck and start upgrading it as a hobby, I got this truck 7 years ago and it was totally stock. BODY outside condition is good went threw a hail storm few yrs ago and has few dents and whatnot nothing to bad at all very nice esp for the yr of the truck. kept the original paint scheme but added some iron cross airbrushed and cleared over vehicle. has a 8in fabtech coil over front conversion kit and rear heavy leaf springs and gas shocks by fabtech. rear traction bars and front stabilizers . 20x10 fuel hostage wheels in black with 38x13.50x20 toyo m/t open country tires new only 1500 miles on them and already rotated them once. outside rating 9 out of 10 cause of lil hail damage. INTERIOR very nice all black plush leather with harley davidson logos and name throughout inside front and rear cup holders heated front seats all power loaded out all but sunroof.i give inside a 9 out of 10 because driver seat has some wear from use small tear where seat stiches together and on driver side arm rest as wear every truck I've seen has the same problem just use and age of tuck. carpet is perfect but one lil mark in the rear floorboard from something hot its a non smoker truck...tinted windows...am/ fm, cd, dvd head unit and all JL audio speakers and component sets rockford fosgate amp and kick panels up front with more component 6.5 kit sounds amazing. ENGINE 6,0 diesel egr delete kit...arp head studs...stage 2 injectors...fast fuel system...banks boss hog kit huge intercooler dual banks monster exhaust 4in and 4in down pipe...k&n air intake and mod...high ram air intake...monster muffler.