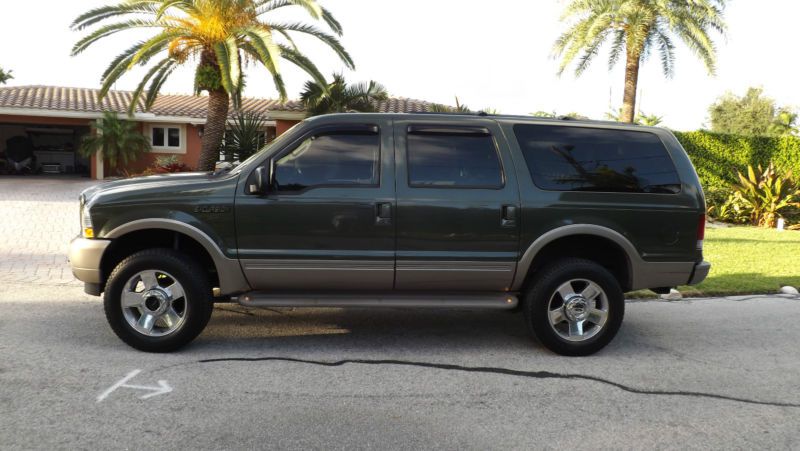 This Excursion was was done right with Ford oem parts,It drives,handles feels great ,with the upgraded suspension
the ride height is about the same as new 4x4 trucks but done with the right parts for the Best Handling,Simply
lifting Excursions only raises a bad suspension higher (NOT SMART)No exspense spared Adult owned and
maintained.This is my 2nd Excursion I know these vehicles and through research upgraded it the correct way
This is a Florida vehicle so it hasn't seen the harsh environments or driving conditions like many other parts of
the country,No Road Salt etc and Florida is Flat no excessive or extra strain on the Drivetrain
This is an EDDIE BAUER edition Excursion so its loaded with all the options from the factory,all power everything
,6 Disc CD player,rear park sensors, power adjustable pedals,rear air,rear entertainment system,Two tone leather
heated seats,HD Tow Package,I put a complete wood kit in front to rear to match factory pieces as well.VERY CLEAN
INSIDE AND OUT
Everything i mentioned put into this Excursion and the maintanence can be verified by my mechanic that performed
all the work done
Not another Excursion Listed done this way,The right way with the right parts
The headliner and door panels were removed and soundproofing was put in(I have pictures showing the soundproofing
when it was being done).
All fluids and filters have been replaced,The front and rear diffs with Royal Purple syn gear oil,The transmission
filter and fluid replaced,The radiator flushed and new coolant and distilled water along with Red Line water weter
was put in
I also recently had the u joints,ball joints changed with Dana Spicer parts and the drive shaft balanced as well
The front control arms for the front sway bar are new as well
The Vehicle check shows 4 owners but I am Both the 3rd and 4th owner as I put the truck in different names ive
owned it for almost 4 years i have 3 vehicles and a Harley so it wasn't my only ride and so have only put 17k miles
on it since I bought it,but I did all the forementioned upgrades in the listing though
If you google Ford Excursion Suspension Upgrades you will see through all the Truck Threads what ive done is the
best way to upgrade an Excursion the correct way to have the best ride,handling,etc as the stock set up for this
size truck is inadequate and fails