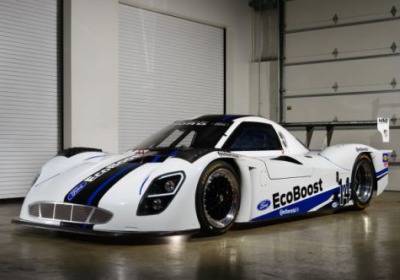 It's not the first time Ford has participated in the Daytona Prototype class as an engine supplier, but in revealing this new EcoBoost V6-powered Riley Technologies prototype for the new United SportsCar Championship, Ford is making a statement: "We want to show Ford EcoBoost's capabilities as an engine that provides both performance and fuel economy, on and off the track," says Jamie Allison, director of Ford Racing.

In addition to supplying the 3.5-liter twin-turbocharged V6, Ford had its production designer Garen Nicoghosian give the racecar brand-inspired design cues with support from Ford Racing chief aerodynamicist Bernie Marcus.

The car is scheduled to compete at next year's Rolex 24 at Daytona on January 25-26, but before that, Michael Shank Racing is working with Ford at another goal. Driving his Ford Thunderbird, NASCAR champion Bill Elliott set the track's top speed record at 210.364 miles per hour during a qualifying run for the Daytona 500 – way back in 1987 -– and Ford thinks it's about time for that record to fall. What better time the introduction of this new Ford-powered Daytona Prototype? Michael Shank Racing plans to use the twin-turbo V6-powered racer to beat Elliott's record, and it expects to begin prepping for the top-speed run on October 9. Scroll down for the full press release below on Ford's latest race effort.

The new engine, which will debut at the 2014 Rolex 24 at Daytona Jan. 25-26, and run the entire 12-race season, will power a new-look Daytona Prototype car, created with Ford corporate design influence. Michael Shank Racing is on board as the first team to put EcoBoost power behind its DP car.

"At Ford Racing, we really put great emphasis on racing production-based vehicles as well as production-based technologies," says Jamie Allison, director, Ford Racing. "We're proud to bring a direct-injected, twin-turbo 3.5-liter V6 EcoBoost engine to the United SportsCar Championship in a field of competitive V8-powered entries. We want to show Ford EcoBoost's capabilities as an engine that provides both performance and fuel economy, on and off the track."


"This engine is the future," says Doug Yates, CEO, Roush Yates Racing Engines. "This Ford EcoBoost engine includes all the newest technologies – direct injection, turbocharging and high efficiency. We're looking at taking it to the next level through this sports car racing program."

While the new engine will make its competitive racing debut at the highly anticipated 2014 Rolex 24 at Daytona, it will actually hit the Daytona track for the first time Oct. 9.

In a joint effort between Michael Shank Racing, Ford Racing and Continental Tire, the 2012 Rolex 24 at Daytona championship team will aim to set a new track record at the "World Center of Speed" by eclipsing the 210.364 mph lap laid down Feb. 9, 1987, by NASCAR champion Bill Elliott, who pushed his Ford Thunderbird to the top of the speed charts in qualifying for the Daytona 500.

"It's really a privilege to have an opportunity to put your name in the record books like this," says team owner Mike Shank. "It is almost inconceivable that this record has stood for such a long time, so it's pretty special to be involved. We worked a long time to develop our relationship with Ford to be in a position to take on projects like this. Anytime you can get in the record books, it is a great opportunity and just builds on what this company has done."

"Ford Motor Company stands for innovation and leading-edge technology, so having a chance to debut our Ford EcoBoost technology in a high-visibility setting such as this record run attempt, as well as the entire 2014 USCC schedule with its iconic races is great," says Allison. "Through USCC racing and its fan outreach, we want to showcase how EcoBoost technology presents the combined benefits of performance and fuel efficiency – something all consumers would want in their vehicles."

Weather permitting, Michael Shank Racing will take to the track at 8 a.m. Oct. 9 to start building up speed for the record attempt.

To prepare for the record run and upcoming season, the EcoBoost engine has recently undergone endurance testing at Ford's Dynamometer Lab in Dearborn, Mich., specifically at the specialized 17G cell. Production and racing engineers from Ford and specialists from Roush Yates Racing Engines have collaborated to ensure the engine is ready for the season.

"The key about this dyno cell is that it's dedicated to motorsports, but it's within Ford's dynamometer facility," says David Simon, Ford Racing engine engineer. "We can do full vehicle simulation in racing conditions, in a way some of our other cells aren't capable of doing. It's very, very specific to high-performance racing engine programs."