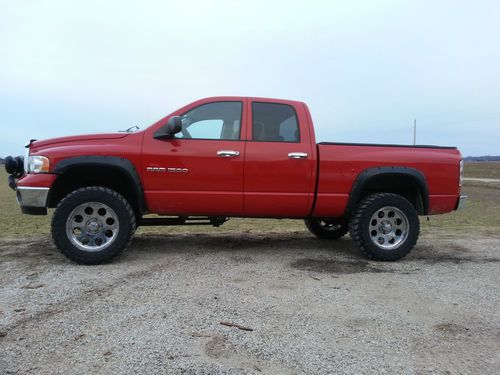 up for sale is my 2004 dodge ram 1500 slt. beautiful red crew cab , professionaly lifted with a fabtech 6 inch suspension lift. truck has 20 inch pro comp wheels wrapped in two month old 35x12.50x20 federal mt tires. truck has a magnaflow exhaust, rhino liner bed liner, alteeza tail lights, amp research automatic running boards.... they stay tucked up until the door is opened and they fold down to help you climb in then fold back up when door is closed!! truck has chrome grille insert and kc light bar with 4 eight inch kc lights mounted to it. the engine is only modified with an airaid cold air intake with a huge k and n air filter. inside the cab all 7 of the interior speakers have been changed with mtx audio and under the rear seat is an mtx thunderform box with 2 mtx 10 inch subs and amp. the truck has red led light strips tucked under the footwells in the dash as well. truck has chrome door handle covers and bushwacker fender flares as well.  when i purchased this truck from the local dodge dealership last year i was told that the truck was owned by a higher up from bushwacker and was used as a showboat for bushwacker and all mods performed where documented through a four wheel drive magazine. i have not checked into this too much to confirm but there is alot of money in very tasteful mods done to truck. contact chris for any further questions.  truck runs great everything works and goes straight down the road.  only bad thing is a small ding in right rear door and i am missing 2 center caps to rims thanx to my local walmart not putting them back on properly when i had new tires installed.forgot to mention truck also has an aftermarket alarm system with remote start option...... i just dont know how to use it  lol