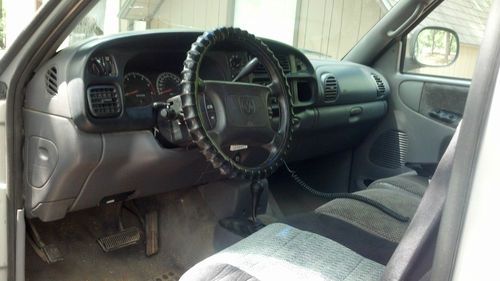 Condition: UsedA vehicle is considered used if it has been registered and issued a title. Used vehicles have had at least one previous owner. The condition of the exterior, interior and engine can vary depending on the vehicle's history. See the seller's listing for full details and description of any imperfections.Seller Notes:"I have been out of work since March so I have got to sell my truck to pay bills. Good used 1999 Dodge Ram 4X4 automatic, Very dependable I get a puff of smoke when I first start it of the morning.Oil pressure is good 40-60 psi power windows, power door locks, A/C and Heater works good, needs tires, while changing water pump a few years ago I replaced the timing gears and chain. The transmission was rebuilt around 210,000 miles. both wheel bearing hub assemblies were recently replaced. New radiator aprox. 1.5 years ago. The dash has cracks and the driver seat is worn through to the foam rubber"

Good daily driver, this pickup runs great, needs tires, I would not be selling it but i need to pay bills I have been off work since March from an injury from a fall. I can't think of any thing that is wrong with the truck other than needing tires the dash has cracks (is typical for dodge pickups) if you have any questions you can text me 4178809653 or email tblrck23@aol.com