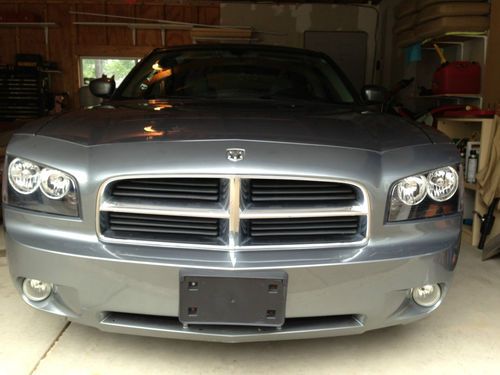 I AM LISTING THIS BEAUTIFUL 2006 DODGE CHARGER R/T WITH THE HEMI ENGINE FOR MY FATHER.  HE PURCHASED IT USED IN 2008, AND IS THE SECOND OWNER.  SINCE HIS PURCHASE, HE HAS ONLY PUT 15000 IN 5.5 YEARS.  THIS CAR HAS EVERY FACTORY OPTION OTHER THEN THE SPOILER.  IT HAS HEATED LEATHER SEATS, NAVIGATION, MULTI-DISC CD PLAYER, REAR TV/DVD FACTORY SYSTEM, MOONROOF, SIRIUS RADIO READY TO NAME A FEW.  HE HAS TRULY PAMPERED THIS CAR.  HE IS ONLY SELLING IT BECAUSE HE GOT A SECOND CAR AND DOESN'T DRIVE IT MUCH.  HE HAS A CLEAR ILLINOIS TITLE IN HAND.  HE IS A 60 YEAR OLD MAN THAT DID NOT ABUSE IT.  IT IS VERY CLEAN, AND HE ADDED THE WEATHERTECH FLOORMATS TO PROTECT THE INTERIOR.  ONLY BODY WORK TO NOTE IS THE TRUCK LID HAD A SMALL DENT ON IT WHEN HE PURCHASED IT, HE PAID A BODY SHOP TO REPAIR THE MINOR DENT, NOT NOTICEABLE AT ALL, JUST WANT TO BE TRUTHFUL ON THE LISTING.  NO ACCIDENTS WHATSOEVER.  AUCTION WINNER WILL NEED TO HAVE CERTIFIED FUNDS, OR CASH ONLY.  THE VEHICLE WILL NOT BE RELEASED UNTIL CERTIFIED FUNDS HAVE CLEARED MY FATHERS FINANCIAL INSTITUION.  IF YOU HAVE ANY QUESTIONS WHATSOEVER, PLEASE CALL OR TEXT ME AT 630-452-8653.  I CAN PROVIDE YOU WITH JUST ABOUT ANY INFORMATION YOU MAY NEED OR ADDITIONAL PHOTOS.  THANK YOU SO MUCH FOR LOOKING.  *******AUCTION WINNER WILL HAVE TO SEND A PAYPAL PAYMENT OF $500 UNITED STATES CURRENCY WITHIN 48 HOURS OF AUCTION END THAT IS NON-REFUNDABLE.  CAR IS AVAILABLE FOR VIEWING IF YOUR IN THE CHICAGOLAND AREA BY APPOINTMENT ONLY.