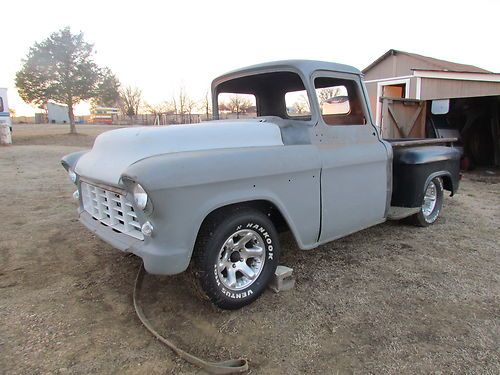 1955 chevrolet short bed step side, bare bones.  Starting with the front clip, it is pretty fair but does have its issues. The hood has some damage in the front, and the driver side fender needs a patch panel in the usual lower spot and there are a couple of dents around the head lights. The front of the frame has been modified with a 78' camaro subframe. It has new stock height coil springs, tie rods (the rubbers have dried and cracked). The welding and installation of the frame is really solid work. The radiator support hasn't had brackets made to attach to the frame. Moving back to the cab, I'd say about 85% of body work is done. New cab corners have been installed and rocker panels, however the driver is corner needs to be shaped in the door jam, the door doesn't fit like it should. The steps are original and nut rusted threw but does have some pitting. The floors are solid and bed liner has been sprayed on the bottom. Both ash trays have been welded up. The doors haven't been worked and they have the usual crease in the front and some rust on the bottom. both doors and front clip have been sand blasted and primed. The rear end is a narrowed ford 9" with 3.73 gears and has been rebuilt, I have the drums to them also. The suspension is a Heidts 4-link with the coil over shocks. The wheels are American Racing 15".  Mickey Thompson sportsman 2 tires in the back, the front are a small chevy bolt pattern and the backs are the ford bolt pattern. The Bed I haven't done much work to, its basically a bunch of surface rust I haven't seen any rot threw. Both rear fenders are fiberglass so NO DENTS!!! The tailgate is new but a little weathered it was a reproduction tailgate but the more expensive OER one made using original equipment. This truck comes basically as you see in the pics, I've tried to give all the issues I can think but there are probably a few I forgot.