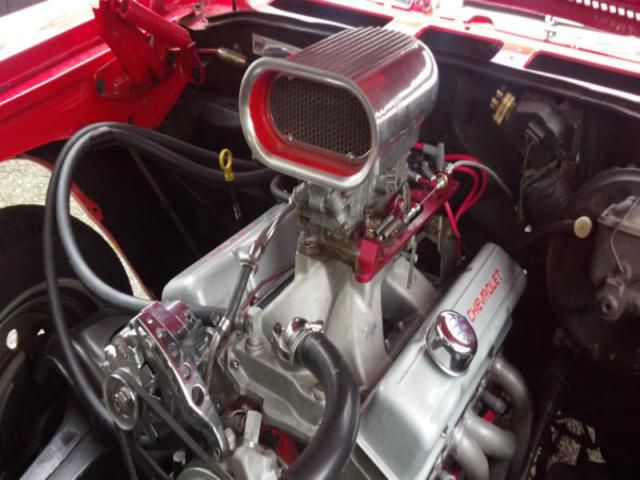 This beautiful 1970 Monte Carlo has been assembled over the course of several years, with much attention to detail and built to be driven on a regular basis. The body is free of squeaks and rattles, the window glass is adjusted so there is virtually no wind noise while driving, and the alignment allows fantastic handling with zero tire wear. The cowl hood is all steel with a reinforcement along both sides, full length, and a support bracket to eliminate the flutter along the top edge of the opening associated with high speed when drag racing. The tires are all perfectly balanced so there is no vibrations at or above freeway speeds. There is zero curb rash on any of the wheels. The interior is incredibly comfortable with an extra 1/2" layer of high density foam backing built into the upholstery. The front seat back frames were modified to eliminate the headrest, without simply removing them and laying the fabric over the top of the opening. The seat belts are custom made with aircraft style buckles, DOT approved, and color match is spot on. The beauty has the look and the sound to turn heads wherever you go, and it will run consistent at the track on pump 91 octane fuel run after run with absolutely no issues. The motor had a very recent tune up with new spark plugs, new plug wires custom fit to run under the headers and across the back of the motor, to the HEI distributor with MSD 6AL spark box. This unit has a rev limiter featured as well. The transmission is a TH350 with a Hughes torque converter and a Hughes deep cast aluminum pan as well. The pan has a drain plug, but the fluid and filter are changed regularly. The rear axle is a BOP 10 bolt, with 3.73:1 gears on an Auburn posi unit. It hooks up straight and makes no noise. The gears are very quiet as are the bearings. Wheels are 15 X 8 in the rear, 15 X 3.5 front. Tires are Mickey Thompson 295-65-15 and Firestone 215-75-15. Both sets have more than 70% tread remaining.