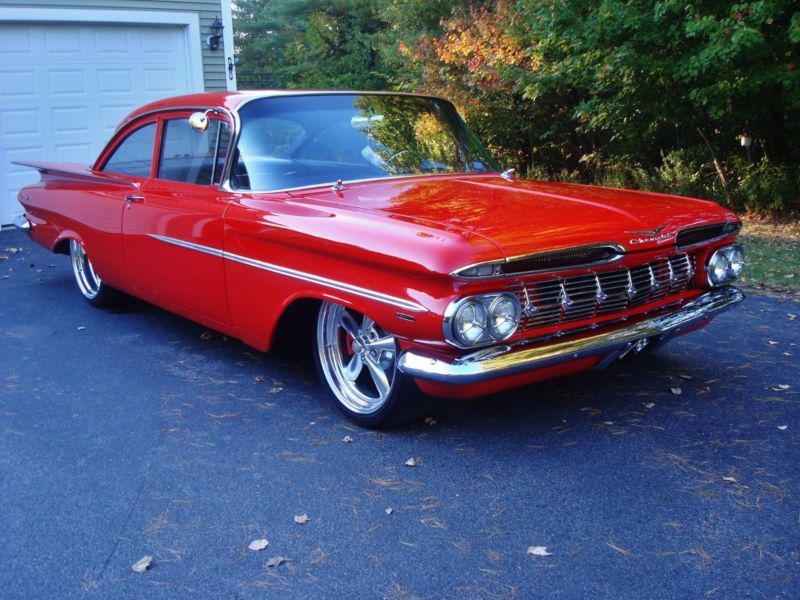 1959 Chevy Biscayne post coupe Restomod! The body and paint on this car is beautiful
arrow straight and ocean deep with a rock hard shine. All the trim has been chrome. Has beautiful real tinted
glass. The front and rear bumpers are done in a show chrome. The dark gray leather interior is done to a high level
and is beautiful and not to mention very comfortable. The trunk compartment is all done to match the beautiful
interior. Options are AC/Heat, high polish tilt steering column with leather wheel, all matching custom gauges,
seat belts, up dated stereo radio with Cd changer in the trunk, Air Ride on all 4 corners. The engine compartment
is all done up with a chrome out Chevy 383 small block with 202 heads. Has a aluminum radiator with a electric fan
to keep it running cool on the hot days when cruising! Has a automatic transmission shifts super nice and smooth.
Has four wheel disk brakes on all four corners with drill rotters. The wheels are a high end wheel being Billet
Specialties high polish shine. Has 20" on the front and 22" on the rear. The under carriage is as clean and dry as
the top side! These 1959 Chevy's are getting more and more popular every day! Here is your chance to own one of the
nicest at a great price.