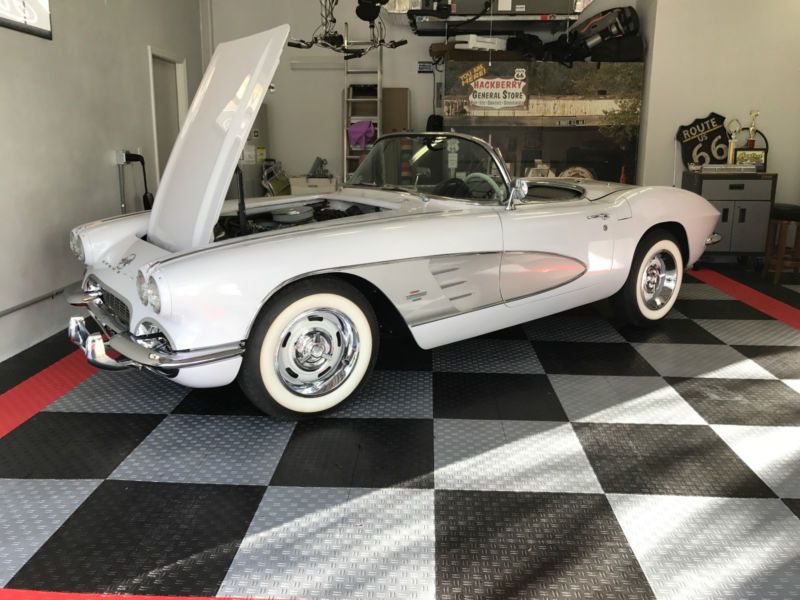 For more pictures email at: saundrassstreets@clubjaguar.com .

For Sale is this 1961 Chevrolet Corvette. This Corvette roadster is a beauty and went through a full restoration
completed a year ago. The person I bought it from had it for 27 year and it was a labor of love. The previous owner
and his brother built it together for years and completed it right before his brother died from cancer. I have only
owned it a short period of time but have decided I do not have the time to enjoy. I have taken it to three car
shows and won trophies at all of them. One thing I was blown away by was how much attention this Corvette gets from
people young and old. I am amazed at the quality of competition in these shows with other makes but it seems like
everyone is attracted to the Corvette.
The White and Gray Cove exterior and the Gray interior is a class act. I added a custom 15" leather steering wheel
and Loyd custom embroidered matts to really make this thing shine. It's car show ready and looks amazing driving
down the road. (See video.)
4 speed manual with a 327 engine. I have all the paperwork from the renovation and also the paperwork for the extra
workI have put into it. Black New Convertible top. Original steering wheel comes with it. Also, if you are
purchasing in Florida I have a "Sixty 1" License plate that can be bought with it. The car has only 2 small
blemishes on the whole car. see pics. They are very hard to see. Everything else on the car is cherry.