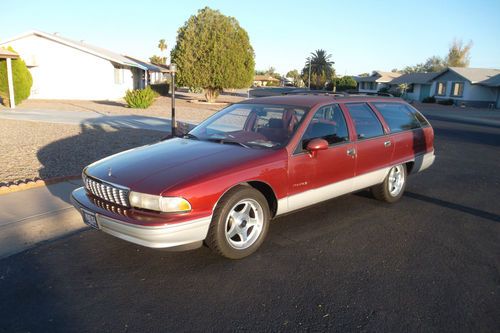 Condition: Used: A vehicle is considered used if it has been registered and issued a title. Used vehicles have had at least one previous owner. The condition of the exterior, interior and engine can vary depending on the vehicle's history. See the seller's listing for full details and description of any imperfections. ...
1991 Chevy Caprice Wagon in good shape. This car has the upgraded SS factory wheels. Runs and drives great. Nice for large family, towing or to keep as a classic. I had a recent stroke and need to sell off a couple of my cars.
197K miles and runs like half the miles!!
5.0L V8 GM crate motor replaced at 174K miles and the $4,100 receipt to prove it.
Automatic Trans
PW, PDL, Tilt, CC, CD, PWR Seat, Third row seating
Loaded with options
Lots of recent maintenance including:
New AC components
New Radiator
New factory style seat upholstery
New tires last year
I have an inch worth of receipts on this car. You are more than welcome to them when you buy the car.
I can be reached by phone at 480-526-6863.
I am not looking for trade on anything. Again, I have to many vehicles and need to sell this one.